While striking six fours and four sixes during his 36-ball furious gallop, Pant showed why his World Cup exclusion became a subject of intense debate. 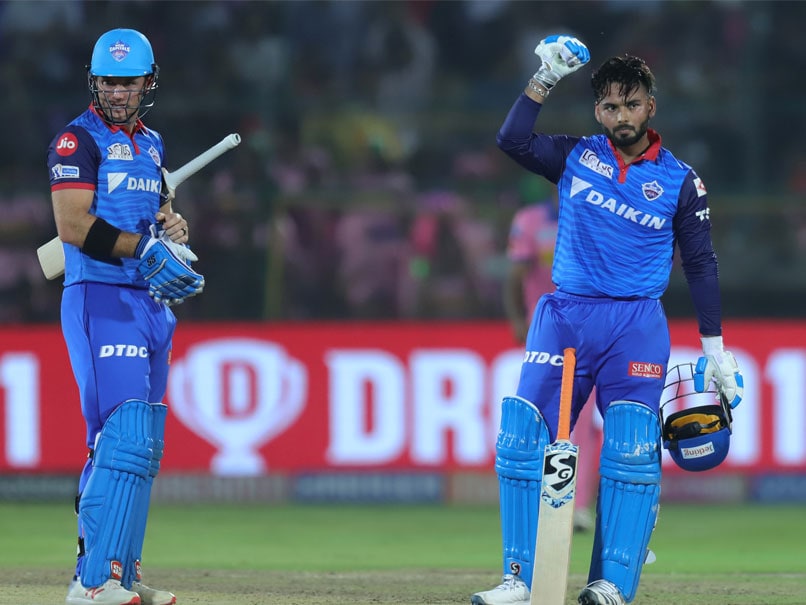 Rajasthan Royals did not know what to bowl, where to bowl at Rishabh Pant, whose blistering 78 gave Delhi Capitals a six-wicket win and pole position in the Indian Premier League 2019 in Jaipur on Monday. While striking six fours and four sixes during his 36-ball furious gallop, Pant showed why his World Cup exclusion became a subject of intense debate. Shikhar Dhawan got Delhi Capitals off to a rollicking start with a barrage of fours and sixes, adding 72 runs for the opening wicket with Prithvi Shaw in only 7.3 overs.

But it was Pant, who played the most influential role in DC's win, finishing it off with a six. After a quiet first over, Dhawan cut loose and hammered Dhawal Kulkarni for a six over deep square and leg and a four.

Having removed Kulkarni from the attack, Dhawan went down on his knee and whacked Shreyas Gopal over fine-leg for another maximum, and then hit two successive fours. Kulkarni was brought back and the senior India opener responded with two more boundaries.

Shaw had luck on his side as Ashton Turner dropped him on 10, and the young batsman capitalised on that by hitting a few boundaries. After pulling Gopal for a four, Dhawan was stumped while going down the wicket, and DC skipper Shreyas Iyer fell to a horrendous shot.

But Shaw and Pant added runs in double quick time to help Delhi Capitals cross the line. While Shaw was contend to play second fiddle when Dhawan attacked, he opened up in the company of Pant, who found the fence regularly. It was a mature knock by Pant, who reached his half-century in 26 balls.

Earlier, blending panache with power, Ajinkya Rahane roared back to form with a scintillating century and propelled Rajasthan Royals to 191 for six. Rahane remained not out on 105 off 63 balls, decorating his knock with three sixes and 11 fours, while Steve Smith contributed 50 off 32 deliveries.
Asked to bat after Iyer called correctly at the toss, Rahane spearheaded Rajasthan Royals' innings after getting a life on 16, the culprit being Ishant Sharma, who dropped a sitter at short fine-leg. The drop hurt the visitors, but Delhi did well to prevent RR from going past 200.

Entering the game with over 650 runs against Delhi in the league, Rahane chose his favourite opponents to find form, and when he walked back to the dressing room, he had over 750 to his name. To start with, Rahane drove Ishant through a crowded off-side field for a boundary, a shot that had his characteristic elegance written all over it.

Stripped of captaincy last week following a string of poor results, the 30-year-old went into attack mode and smashed Axar Patel for a six and a four at the Sawai Mansingh Stadium, which had a dash of pink. Seeing the flight early, Rahane danced down the crowd to hoist's Axar ball over him and into the sightscreen.

Unfazed by the sight of pacer Kagiso Rabada steaming in, he smoked the South African's short of a length delivery down the ground for another maximum. Rahane soon brought up his second IPL hundred, the first coming seven years ago.

Meanwhile, Smith, who replaced Rahane as captain hours before the start of their last match against Mumbai Indians, struck medium pacer Sherfane Rutherford for three consecutive boundaries to score his second successive half-century of the season.

And even as Smith and Ben Stokes gout out in quick succession, Rahane was going strong, swiftly hitting Morris for a boundary over mid-off. At the other end, Ashton Turner fell for a third golden duck.

Ajinkya Rahane Rajasthan Royals vs Delhi Capitals, Match 40 IPL 2019 Sawai Mansingh Stadium, Jaipur Cricket
Get the latest updates on ICC T20 Worldcup 2022 and CWG 2022 check out the Schedule, Live Score and Medals Tally. Like us on Facebook or follow us on Twitter for more sports updates. You can also download the NDTV Cricket app for Android or iOS.