A war of words between Shane Watson and Ishant Sharma cropped up a day after Ravichandran Ashwin's 'mankad' controversy. 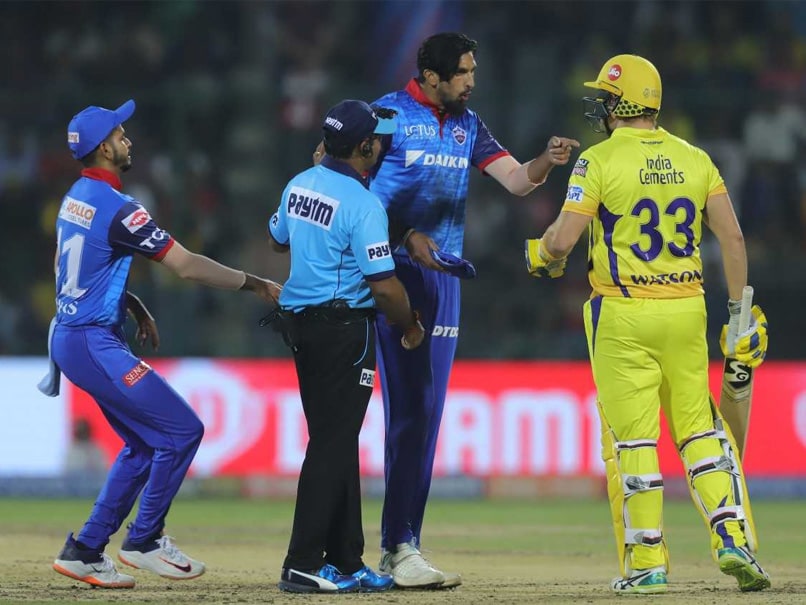 A day after the 'mankad' controversy left the cricketing world divided, Delhi Capitals bowlers Ishant Sharma and Kagiso Rabada engaged in a heated war of words with Chennai Super Kings batsman Shane Watson. It started in the third over of Chennai's innings after Ishant Sharma animatedly celebrated the wicket of Ambati Rayudu. Ishant's action prompted laughter from Shane Watson, which left the Indian pacer fuming. Ishant Sharma had to be pulled away by skipper Shreyas Iyer during his heated mid-pitch confrontation with Shane Watson in the Indian Premier League (IPL).

Later in the match, the Australian was at loggerheads with South African Kagiso Rabada. It appeared that Watson blocked the bowler's path, prompting another angry encounter.

However, Watson and Rabada laughed it off at the conclusion of the match which the Chennai Super Kings won by six wickets.

At the end of the day, all's well that ends well #SpiritOfCricket #VIVOIPL #DCvCSK pic.twitter.com/o8SnlN9mls

In a chase of 148, the defending champions were led by a blistering 26-ball 44 from Shane Watson before MS Dhoni's watchful 32 sealed their six-wicket win.

In spite of a patient fifty from Shikhar Dhawan and cameos from Prithvi Shaw (24 from 16 balls) and Rishabh Pant (25 from 13 balls), Delhi Capitals posted a modest total of 147/6 after opting to bat.

Ishant Sharma Kagiso Rabada IPL 2019 Cricket Delhi Capitals vs Chennai Super Kings, Match 5
Get the latest updates on ICC T20 Worldcup 2022, check out the Schedule and Live Score. Like us on Facebook or follow us on Twitter for more sports updates. You can also download the NDTV Cricket app for Android or iOS.