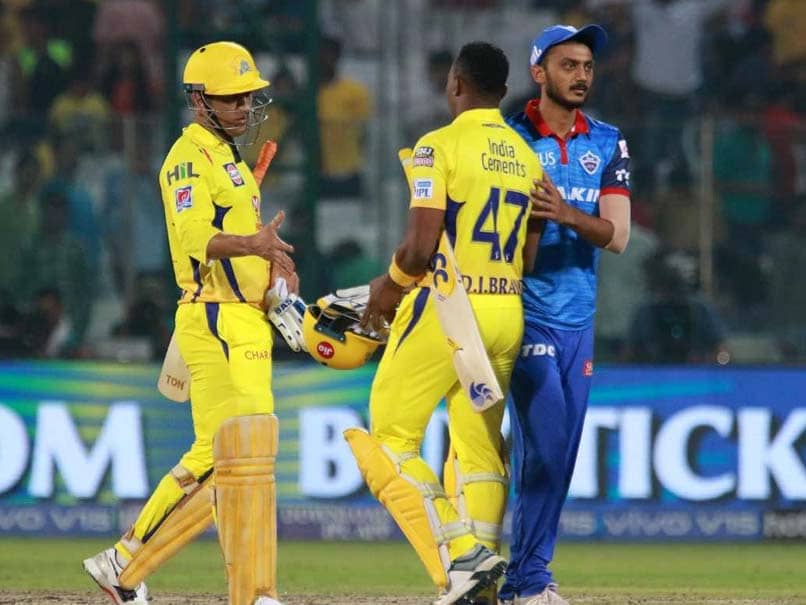 Dwayne Bravo picked up three big wickets and scored the winning boundary for Chennai Super Kings as they defeated Delhi Capitals by six wickets in the fifth match of the Indian Premier League (IPL) 2019 at Feroz Shah Kotla on Tuesday. Skipper MS Dhoni stood unbeaten on 32 as Chennai Super Kings chased down the easy 148-run target with two balls to spare. With this win, CSK secured the top position in the IPL 2019 points table as they had defeated Royal Challengers Bangalore in the season opener on Saturday.

The scoreline might suggest that it was a close game but CSK were always in control of the chase despite a lot of balls being wasted by Dhoni at the back end of the innings.

When Delhi batted first, run-scoring looked an arduous job with a middle-order collapse dashing hopes of a big total.

When CSK started their chase, it was expected that the slowness will be a factor but it seemed Watson (44 off 26 balls) and Suresh Raina (30 off 16 balls) were batting on a different track. They showed positive intent which was singularly lacking in Dhawan and Co.

They hit eight fours and four sixes between them to add 52 runs in only four overs and there was no recovery from that onslaught.

Ishant Sharma (0/28 in 3 overs) bowled too many length balls which were driven with disdain and short ones were cut ferociously. Five boundaries off Ishant's in three overs was just the start that CSK needed.

Veteran leg-spinner Amit Mishra got a couple of wickets but mostly bowled hittable length with three maximums coming in his spell, including the decisive six from Dhoni (32 no off 35 balls).

Kagiso Rabada, who was impressive in the first match, was erratic on the day and an altercation with Watson only disturbed his concentration.

By the time Watson was out, it was a formality for the CSK to record their second victory but Dhoni and Kedar Jadhav (27) made an easy chase look difficult.

Earlier, Dhawan played the role of sheet anchor in his 51 off 47 balls that had seven boundaries but unfortunately failed to accelerate during the final overs. This left the home team at least 30 runs short of a fighting score which proved to be decisive in the end.

From a comfortable 120 for 2 with the dangerous Rishabh Pant at the crease, CSK seized the momentum, effecting a middle-order collapse. Capitals lost four wickets for seven runs in just 1.5 overs.

From 118 for 2 after 15 overs, the last five overs yielded only 29 runs.    With the ball stopping and coming, Capitals batsmen found Dwayne Bravo's (3/33 in 4 overs) variations difficult to handle.

Dhawan, however, continued to hold one end up and hit the occasional boundary in between, even as stroke making became increasingly difficult.

Pant (25 off 12 balls), during his 41-run stand with Dhawan, tried to negate the pitch factor but did not last till the death overs.    He did reach out to a short ball from Harbhajan, dispatching it over long off for a six.

In the next over, his short arm pull off Dwayne Bravo was taken by Shardul Thakur at deep square leg boundary.

With Colin Ingram (2) and Keemo Paul (0) also being dismissed cheaply, followed by Dhawan, the expectations of a 175-plus total withered away.

Dwayne Bravo Cricket IPL 2019 Delhi Capitals vs Chennai Super Kings, Match 5
Get the latest updates on IPL 2021, IPL Points Table , IPL Schedule 2021 , live score . Like us on Facebook or follow us on Twitter for more sports updates. You can also download the NDTV Cricket app for Android or iOS.