Rishabh Pant Lifted In The Air By Sourav Ganguly After Win Over Rajasthan Royals, Says It Was Surreal

Rishabh Pant was instrumental in guiding Delhi Capitals to an important win over Rajasthan Royals. 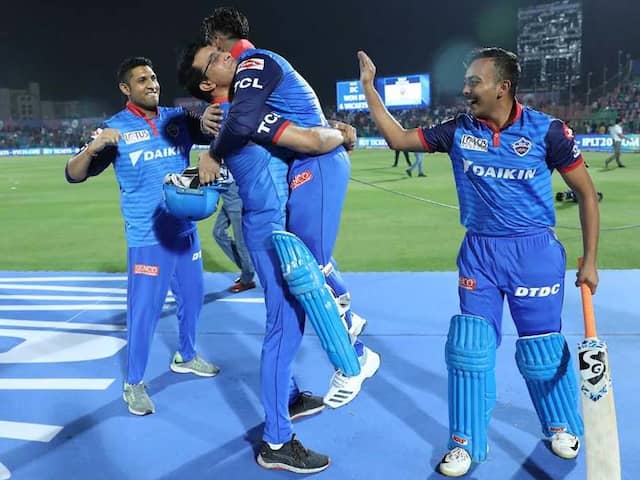 Rishabh Pant, fresh from his match-winning knock for Delhi Capitals against Rajasthan Royals, told teammate Prithvi Shaw in an interview after the match, which saw the Capitals chasing a daunting score of 192 with 4 balls to spare, that it was a very special moment for him when team mentor Sourav Ganguly gave him a hug and lifted him in the air after the win. This came at the back of match-winning knock by Pant, where he smashed 78 not out off 36 balls at a strike rate of 216.66, earning him the man of the match award.

Prithvi Shaw, who describes Pant as a "huge finisher", said that he felt really good finishing the match batting with Shaw. "With you (Shaw), I felt that we can take the game to the end, so there was a lot of confidence from within," Shaw said.

Pant also stated that the partnership between them, which accrued 84 runs out of which Pant contributed 60, was instrumental in achieving the victory.

Rajasthan Royals Sourav Ganguly Sawai Mansingh Stadium, Jaipur IPL 2019 Rajasthan Royals vs Delhi Capitals, Match 40 Cricket
Get the latest Cricket news, check out the India cricket schedule, Cricket live score . Like us on Facebook or follow us on Twitter for more sports updates. You can also download the NDTV Cricket app for Android or iOS.