Prithvi Shaw is one of the stars of the Delhi Capitals batting line-up and plays domestic cricket for Mumbai. 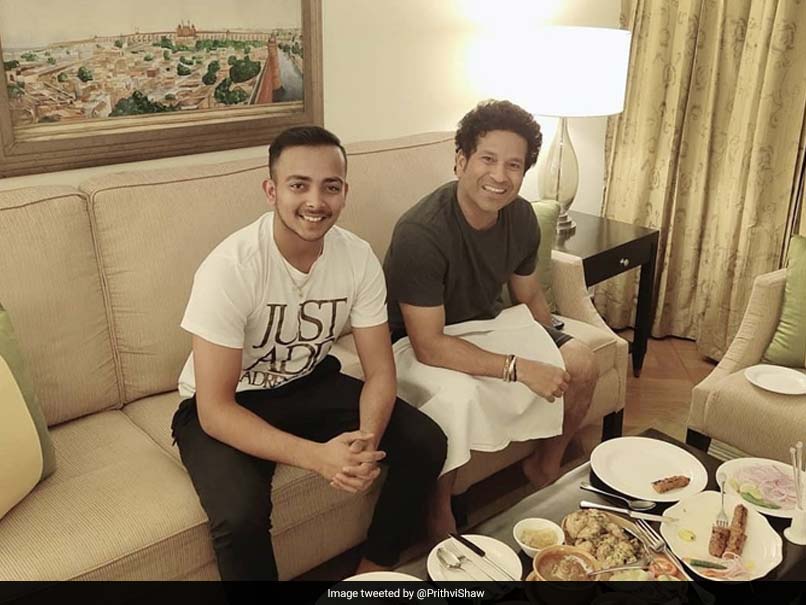 Prithvi Shaw, who made his India debut in the Test series against the Windies last year, has often been compared with Sachin Tendulkar because of his flawless batting style and technique. On Thursday, Prithvi Shaw, who plays for Delhi Capitals in the Indian Premier League (IPL), met Mumbai Indians' team icon Sachin Tendulkar and fans could not contain their excitement. Shaw enjoyed a quiet dinner with the batting legend and took to Twitter to post a picture of the iconic meeting. "Thank you SACHIN SIR for the lovely dinner It's always a pleasure meeting you SIR @sachin_rt Sir," Shaw captioned the picture.

Thank you SACHIN SIR for the lovely dinner It's always a pleasure meeting you SIR @sachin_rt Sir pic.twitter.com/VLuR9Bee1O

The picture went viral in no time and garnered some amazing reactions from the fans of Indian cricket.

Because it's time to cross "dinner with @sachin_rt" off your bucket list.

Past meets the Future!! pic.twitter.com/QhE5sVjJ3e

You are the next Sachin. You can take it from me. Mark my words. Just go out to the field, play your natural game, Prithvi. You'll conquer.

All look up to you as the next SRT! Take his blessings and carry forward the legacy! You are doing great! Work hard and don't lose focus ! As he said ! Impossible is nothing

Legend meeting a legend to be....

God with Future Star @PrithviShaw waiting for ur century

Delhi Capitals, who won their last three games against Royal Challengers Bangalore, Kolkata Knight Riders and SunRisers Hyderabad, will look to continue their winning momentum when they take on Mumbai Indians at the Feroz Shah Kotla stadium on Thursday.

Prithvi Shaw, who has not been included in India's 15-man squad for World Cup 2019, will be eager to help his IPL franchise qualify for the playoffs this year.

Delhi Capitals, who are in the middle of a remarkable resurgence, have not finished in the top four since 2012.

Sachin Tendulkar Prithvi Shaw IPL 2019 Cricket Delhi Capitals vs Mumbai Indians, Match 34
Get the latest updates on SA vs IND 2021-22, check out the Schedule and Live Score . Like us on Facebook or follow us on Twitter for more sports updates. You can also download the NDTV Cricket app for Android or iOS.