Shikhar Dhawan, who scored a fifty on Day 4, questioned the visitors' approach to the pollution issue during the Delhi Test and said that it cannot come in the way of going about their job of playing as professional cricketers. 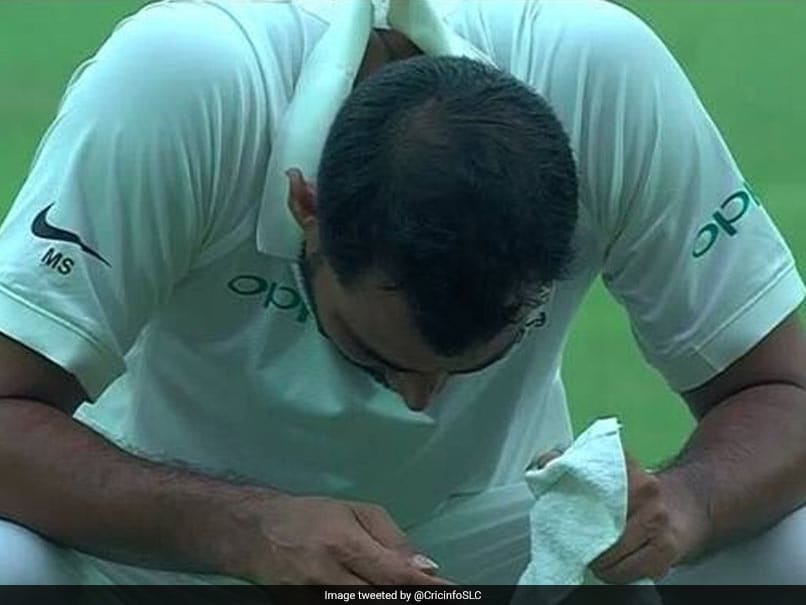 Mohammed Shami stopped in mid-over to vomit, crouching down and then gulping water.© Twitter

India pacer Mohammed Shami threw up as pollution levels soared at New Delhi's Feroz Shah Kotla stadium, with Sri Lankan fielders again turning to face masks to combat the foul air on the penultimate day of the third and final Test. Shami dismissed opener Sadeera Samarawickrama off a roaring bouncer but stopped in mid-over to vomit, crouching down and then gulping water. He went on to complete the over but left the field after umpires thought it inadvisable to have a paceman bowling in poor light. In the morning session it was Sri Lankan paceman Suranga Lakmal who threw up twice. He went to the dressing room briefly but returned to the field, bowling 14 overs and taking one wicket. Groundsmen rushed on to cover the spot with sand and sawdust.

Shikhar Dhawan, who scored a fifty on Day 4, questioned the visitors' approach to the pollution issue during the Delhi Test and said that it cannot come in the way of going about their job of playing as professional cricketers.

Asked if he sympathized with the Sri Lankans, Dhawan replied: "There are a lot of players in our team who are not used to this pollution thing in Delhi as they come from other states. But if you have been assigned a job (to play), you can't let anything come on its way. That's my thinking because not everyone in our team is from Delhi. The situation is same for them also.

Sri Lanka were reeling on 31-3 at stumps, chasing a daunting 410-run victory target. Dhanajaya de Silva on 13 and Angelo Mathews were batting when bad light stopped play on the fourth day.

"I thought the guys did superbly well, great attitude. We are professionals and said, 'That situation is a situation, let's get on with it'," Pothas said.

"Our people in discomfort, I think it speaks for itself. The rest we cannot control. The guys did brilliantly today," the South African added.

"It's not easy, it's pretty obvious...there is no more to say about it. We just want to get on with the cricket."

A doctor at the stadium examined three Sri Lankan players and said their vital signs were normal.

Skipper Virat Kohli, who made 50, declared India's second innings on 246-5 after Rohit Sharma reached his half-century in the final session, setting the visitors a formidable victory target.

The Board of Control for Cricket in India said on Monday that New Delhi could be dropped as a venue during winter, when pollution across the region spikes.

BCCI secretary Amitabh Choudhary said venues would be reconsidered "in view of the situation which was encountered in the last two to three days".

"The BCCI has been sensitive on the smog and fog matter over the years," he added.

Comments
Topics mentioned in this article
India Cricket Team Mohammed Shami Feroz Shah Kotla, Delhi India vs Sri Lanka 2017-18 Cricket
Get the latest updates on India vs England Series, India vs England , live score and IPL 2021 Auction . Like us on Facebook or follow us on Twitter for more sports updates. You can also download the NDTV Cricket app for Android or iOS.