India vs Sri Lanka: MS Dhoni's Santa Look Has Twitter In A Meltdown

MS Dhoni was in a festive mood after India's win in Mumbai and his special Santa look led to a frenzy on Twitter. 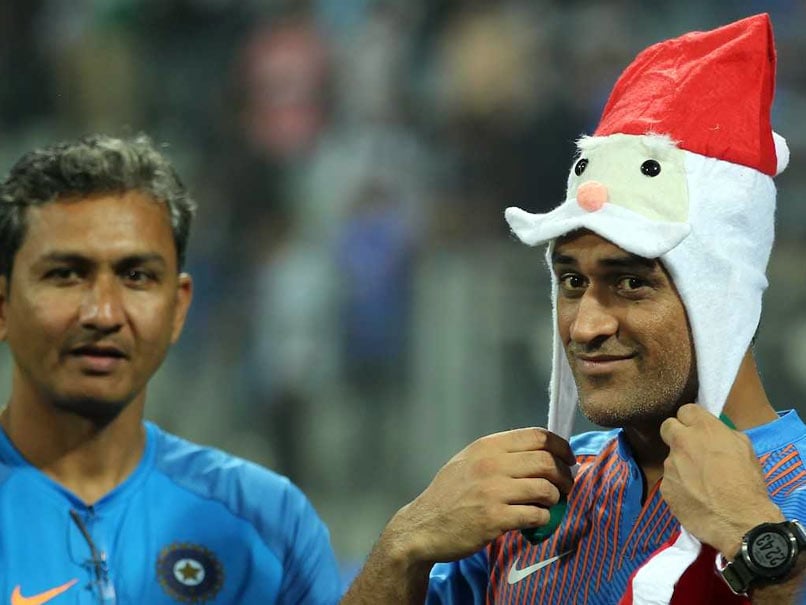 MS Dhoni was all smiles in his Santa look after India's win in Mumbai.© BCCI

India steamrolled Sri Lanka in the Twenty20 international series, completing a whitewash over the visitors by beating them in the third and final T20I five wickets at the Wankhede Stadium in Mumbai on Sunday night. Following India's comprehensive win, MS Dhoni and other Indian players brought Christmas cheer for their fans by donning Santa caps. Dhoni was especially in a festive mood and his special Santa look had fans on Twitter in meltdown. The former India captain was seen sporting a very different Santa cap from his teammates and his hilarious expressions won the fans over.

#MerryChristmas Mahiii @msdhoni u r always a Santa of mine Thank you for all good memories that u've given to us.. tons of love for u stay blessed nd keep rocking forever #Dhoni #Thala #legend pic.twitter.com/6lXI0yW1ni

#Dhoni at his best! And also the cutest with that santa cap!

Dhoni is looking so adorable with that Santa cap on #INDvSL

Dhoni is the cutest santa

Some fans even posted videos of Dhoni bobbing his head around.

This is too much for my poor heart to take Ziva would be so happy seeing you as a santa @msdhoni pic.twitter.com/5Ww4znnjpH

Santa arrived in Mumbai after finishing the match in his new Jersey pic.twitter.com/vfpmeCrvRG

Dhoni was once again the man to hit the winning shot as India were given a scare by the Sri Lankans in Mumbai.

The former India captain, who has been promoted up the order in previous matches, gave the youngsters in the team a chance by coming to bat 4 down with India chasing a modest 136 for a win.

However, despite some lusty blows from Manish Pandey (32) and Shreyas Iyer (30), India found themselves needing 28 off 23 balls when Dhoni came into bat.

With the pitch taking some bounce and shot-making a little difficult, Sri Lanka were gunning for the most unlikeliest of wins.

However, the India gained the upper hand and guaranteed the win when Dinesh Karthik smashed Nuwan Pradeep for a six on the final ball of the 19th over to leave the hosts needing just three runs from the last over.

Dhoni took a double on the first ball to level the scores and as he did in the final of the 2011 World Cup against the same opposition and on the same ground, the wicket-keeper batsman hit the winning runs to get India across the line.

Comments
Topics mentioned in this article
India Cricket Team Sri Lanka Cricket Team MS Dhoni India vs Sri Lanka 2017-18 Cricket
Get the latest updates on IPL Auction 2023 and check out  IPL 2023 and Live Cricket Score. Like us on Facebook or follow us on Twitter for more sports updates. You can also download the NDTV Cricket app for Android or iOS.