Present and past cricketers all over the world greeted their fans on the occasion of Christmas. 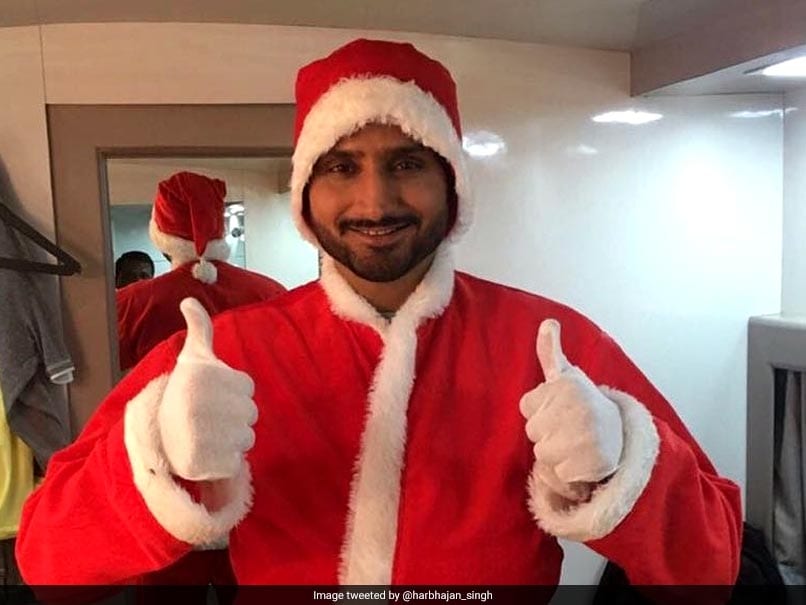 Harbhajan Singh donned a Santa costume to spread the Christmas cheer to his fans.© Twitter

Cricketers from around the world took to Twitter to wish fans on Christmas Day. Indian cricketers like Virender Sehwag, Shikhar Dhawan and Harbhajan Singh were all in a festive mood as they sent in their wishes. English and Australian cricketers, past and present, also spread the Christmas cheer to their fans. On Christmas eve, Team India, MS Dhoni in particular, was in high spirits as the hosts beat Sri Lanka in the third T20I to complete a 3-0 whitewash. Following the match, Indian cricketers all donned Santa caps and pictured enjoying themselves.

Sehwag, like he always does, sent his Christmas greeting in his unique style.

Dhawan, who was not part of the Indian team for the T20I series against Sri Lanka, wished fans by singing the Christmas song along with his wife.

Wishing everyone a Christmas, filled with fun and party. Have a wonderful Christmas!!!pic.twitter.com/Ggh7t6FqOj

Harbhajan, meanwhile, was in full Christmas spirit and posted a picture of him wearing a Santa Claus costume.

May the day bring in lots of happiness and joy all around. #MerryChristmas pic.twitter.com/d9vH9M99de

Other Indian cricketers like Ravichandran Ashwin, Cheteshwar Pujara Mohammad Kaif and Anil Kumble too sent in their wishes.

Merry Christmas ! May there be love and peace. pic.twitter.com/DnZ2g7VTno

Merry X mas all. Have a fab day.

Wishing a festive and happy day to everyone. #MerryChristmas pic.twitter.com/JqV3GT3kP7

Meanwhile, international cricketers too took to Twitter to send in their greetings.

Christmas back home have a great one peeps! Miss my real yard food . #Me&Santa https://t.co/foAOqMrvyB

Bit hot for my Christmas jumper in Melbourne, but it had to be done. Hope you all have a brilliant day pic.twitter.com/rJqUz9cSe3

Merry Christmas everyone .... Have a great day where ever you are .... https://t.co/a3moOrUKvi

Merry Christmas everyone,hope you have a Very special day- Remember the reason for the season,The Birth of our Lord & Saviour Jesus Christ!

Team India celebrated in style after beating Sri Lanka in the third T20I at the Wankhede Stadium in Mumbai. Dhoni was especially in a festive mood and his special Santa look had fans on Twitter in meltdown. The former India captain was seen sporting a very different Santa cap from his teammates and his hilarious expressions won the fans over.

Celebrate the Wonder and the Joy of the Festive Season. Merry Christmas pic.twitter.com/wMHpnnJf6z

India will now have just a few days off before they embark on their South Africa tour where they will be hosted for three-Tests, six-ODIs and three T20Is starting on January 5 next year.

Comments
Topics mentioned in this article
India Cricket Team Sri Lanka Cricket Team Australia Cricket Team England Cricket Team India vs Sri Lanka 2017-18 Cricket
Get the latest updates on IPL Auction 2023 and check out  IPL 2023 and Live Cricket Score. Like us on Facebook or follow us on Twitter for more sports updates. You can also download the NDTV Cricket app for Android or iOS.