Ravi Shastri Blasts MS Dhoni Critics, Asks Them To Take A Look In The Mirror

Ravi Shastri believes India doesnt have another wicketkeeper who can replace MS Dhoni in the one-day format. 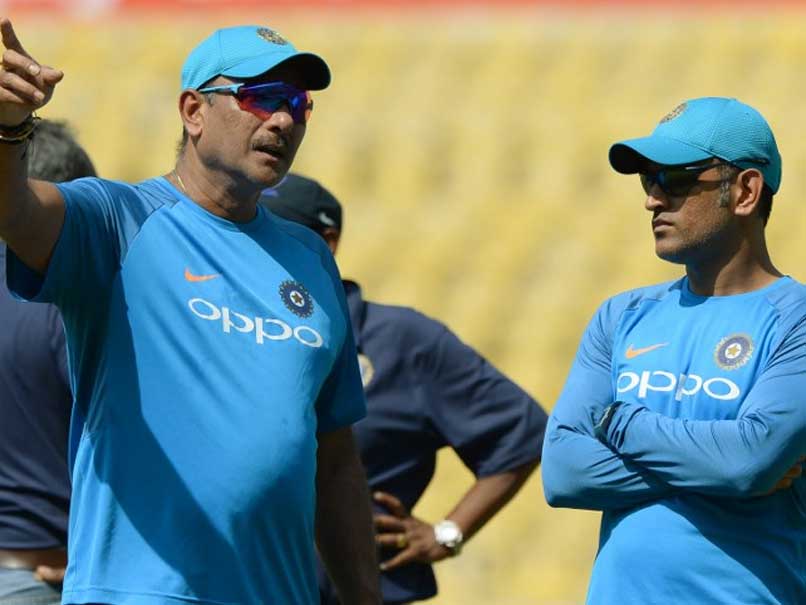 Ravi Shastri has in the past backed MS Dhoni to the hilt and things don't seem to have changed since then. The Team India coach made an impassioned defence of the former India captain, saying Dhoni, aged 36, is fitter and faster than players who are ten years his younger. Shastri came out with some strong statements against people criticising Dhoni and asked them to look at the mirror and see what they were doing at Dhoni's age. The wicket-keeper batsman was pushed up the order in the T20I series and that seemed to have a positive effect on his batting, which was clear to see in the opening T20I at Cuttack. Dhoni had smashed 39 off just 22 balls that helped India post 180.

Dhoni was right on the money with his wicket-keeping skills as well, producing some magical moments to send the opposition batsmen packing.

His upturn, however, has come after some below par performances in the limited-over series against New Zealand in October-November.

"We are not stupid. I have been watching this sport for the last 30-40 years. Virat has been a part of this team for a decade now. We know, at this age, he (Dhoni) can beat players aged 26. People who talk, forget that they played the game," PTI quoted Shastri as saying to 'India Today'.

"If they look at themselves in the mirror and ask the question, 'what they were at the age of 36?'. Would they have run two runs faster? But the time they finish two, this guy will run three. Then he has won only two World Cups and averages only 51. Till today you don't have a wicket-keeper to replace him in the one-day team," Shastri asserted.

Dhoni's sharp reflexes behind the stumps are still unmatched and chief selector MSK Prasad made it clear that none of the younger cricketers have quite yet matched up to the game-changer, under whose leadership India won an unprecedented two World Cups.

The sentiment was echoed by Shastri, who has been vocal in defending Dhoni in the past as well.

Shastri said Dhoni's skill set is not easy to find and it would be long before a replacement comes along.

"He is still one of the best around, not only in the Indian team, but in the world. Some of the things you see with him are not sold in the market. You will not get it anywhere else," he said.

"The fact that he does not play Test cricket, means he should be playing as much cricket as possible till the World Cup in 2019," he added.

Comments
Topics mentioned in this article
India Cricket Team Sri Lanka Cricket Team MS Dhoni Ravi Shastri India vs Sri Lanka 2017-18 Cricket
Get the latest updates on IPL Auction 2023 and check out  IPL 2023 and Live Cricket Score. Like us on Facebook or follow us on Twitter for more sports updates. You can also download the NDTV Cricket app for Android or iOS.