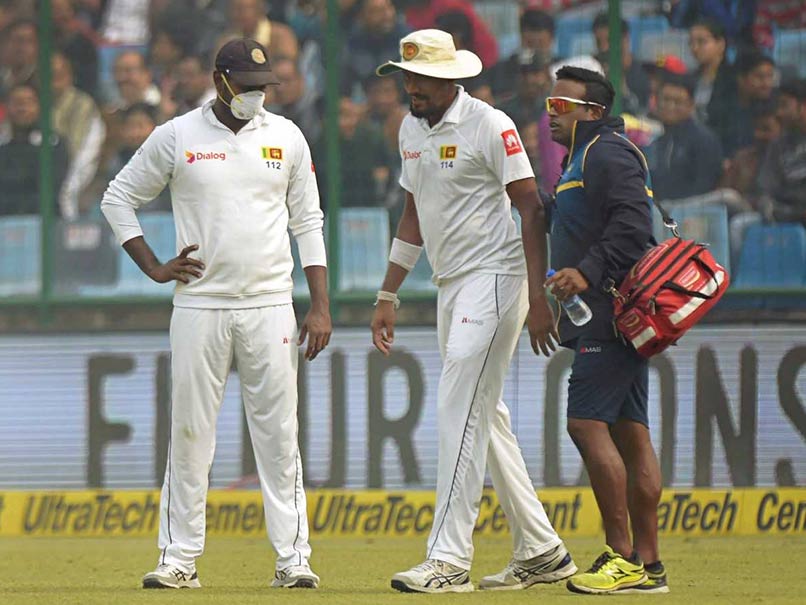 Suranga Lakmal vomitted on the field as pollution took it's toll on the Sri Lankans.© PTI

Delhi's notorious smog, which may rob the Indian capital of future winter Tests, continued to plague the visiting Sri Lankan team on Day 4 of the third and final Test on Tuesday. Some members of the Sri Lankan cricket team once again wore pollution masks as India's 2nd innings got underway at the Feroz Shah Kotla. Play had to be stopped on three occasions on Sunday during India's 1st innings as the Sri Lankan team, wearing pollution masks, complained of breathing problems. And 5 overs into the 2nd innings, Sri Lankan players, Suranga Lakmal in particular, were once again seen in strife. Lakmal fielding at third man had to be attended to by the physio as play was briefly interrupted. He vomitted on the field and was taken off with Dasun Shanaka, wearing a mask, coming on as the substitute fielder.

Captain of Sri Lanka Dinesh Chandimal, who scored a brilliant 164, didn't wear a mask while batting but was seen wearing one as soon as he took the field. The only Sri Lankan player, who seemed to not have any problem with the pollution was wicketkeeper Niroshan Dickwella.

Like in the first innings, Dickwella didn't wear a mask in India's second innings. Another point of note was that both onfield umpires -- Nigel Llong (England), Joel Wilson (Trinidad and Tobago) not once wore a mask on any day of the 3rd Test.

The Indian team too decided against wearing pollution masks when it took the field on Day 3.

Meanwhile, the BCCI on Monday said scheduling of matches in pollution-mired Delhi will be "considered" in future.

"Scheduling of matches in Delhi during this time of the year will be considered," BCCI Acting Secretary Amitabh Chaudhary told reporters at the end of the third day's play here when questions were raised about Delhi's viability as a venue given the rising pollution levels.

There was high drama at the stadium on Sunday when Sri Lankan players' refusal to take the field forced an animated Kohli to declare at 536 for 7.

Comments
Topics mentioned in this article
India Cricket Team Sri Lanka Cricket Team Suranga Lakmal Dinesh Chandimal Niroshan Dickwella India vs Sri Lanka 2017-18 Cricket
Get the latest updates on India vs England Series, India vs England , live score and IPL 2021 Auction . Like us on Facebook or follow us on Twitter for more sports updates. You can also download the NDTV Cricket app for Android or iOS.