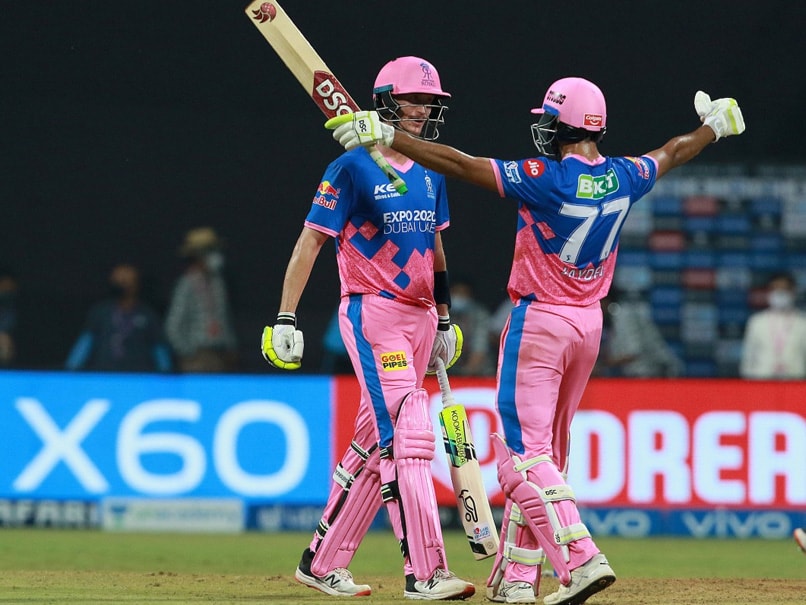 David Miller's combative 43-ball 62 and Chris Morris' timely onslaught (36 not out) powered Rajasthan Royals (RR) to a dramatic three-wicket win over Delhi Capitals (DC) in their Indian Premier League (IPL) match in Mumbai on Thursday. Opting to bowl, RR pacer Jaydev Unadkat took three wickets for 15 runs to restrict the DC to 147 for eight. Miller then anchored the RR chase but it was Morris whose blitzkrieg took RR home with two balls to spare for their first win of the season.

RR were 17 for 3 in the fourth over and 52 for 5 at the halfway mark. They needed 58 from the last five overs and 12 from the final over. Morris ended the run chase with a six off Tom Curran.

RR run-chase was, however, in tatters as soon as it started. Chris Woakes removed openers Manan Vohra (9) and Jos Buttler (1) in a space of three balls in the third over.

In the next over, Kagiso Rabada dismissed the dangerous RR captain Sanju Samson, the only centurion so far this season, with Shikhar Dhawan taking the catch at the slip.

RR were 52 for 5 at the halfway mark and by then the asking rate has gone up to nearly 10 an over. But, Miller and Rahul Tewatia (19) kept RR in the hunt with a 48-run stand for the sixth wicket before Rabada came back to give the much-needed breakthrough for DC.

Captain Rishabh Pant's blistering 32-ball 51, studded with nine fours, was not enough as DC could only post a modest total after being put in to bat. DC made a disastrous start as they were two wickets down for 16 runs in the fourth over with Unadkat dismissing the opening duo of Shaw (2) and Dhawan (9) cheaply.

Shaw was the first to go in the second over, caught at backward point before Dhawan perished while attempting a ramp shot with RR captain and wicketkeeper Sanju Samson taking a stunning diving catch to his right.

Ajinkya Rahane's (8) underwhelming IPL form continued as he offered an easy caught and bowled chance to Unadkat with a slow ball that clocked just 110km per hour.

DC were 36 for 3 at the end of power-play but the slump continued as Marcus Stonis (0), foxed by a Mustafizur Rahman (2/29) delivery, checked his shot at the last minute to offer a running catch to Jos Buttler.

The run rate started increasing once captain Pant came to the crease but still DC were 57 for 4 at the halfway mark. Once he had a full measure of the pitch, Pant opened up and hit four boundaries, three of which were consecutive, to take 20 runs from the 11th over bowled by Rahul Tewatia.

Pant, in excellent form this year, reached his fifty off 30 balls in the 12th over, with a four off Mustafizur but he was run out the next over with bowler Riyan Parag's throw crashing into the stumps. Delhi were 88 for 5 then.

After Pant's exit, Tom Curran gave some respectability to the DC innings with a 16-ball 21.

David Miller IPL 2021 Cricket Rajasthan Royals vs Delhi Capitals, Match 7
Get the latest updates on ICC T20 Worldcup 2022, check out the Schedule and Live Score. Like us on Facebook or follow us on Twitter for more sports updates. You can also download the NDTV Cricket app for Android or iOS.