RR vs PBKS, IPL 2021: How The World Reacted To Sanju Samson Denying Chris Morris A Single In Last Over

RR vs PBKS: With Rajasthan Royals needing 5 to win off 2 balls, Sanju Samson denied Chris Morris the single. Samson was dismissed off the final ball as Punjab Kings won by four runs. 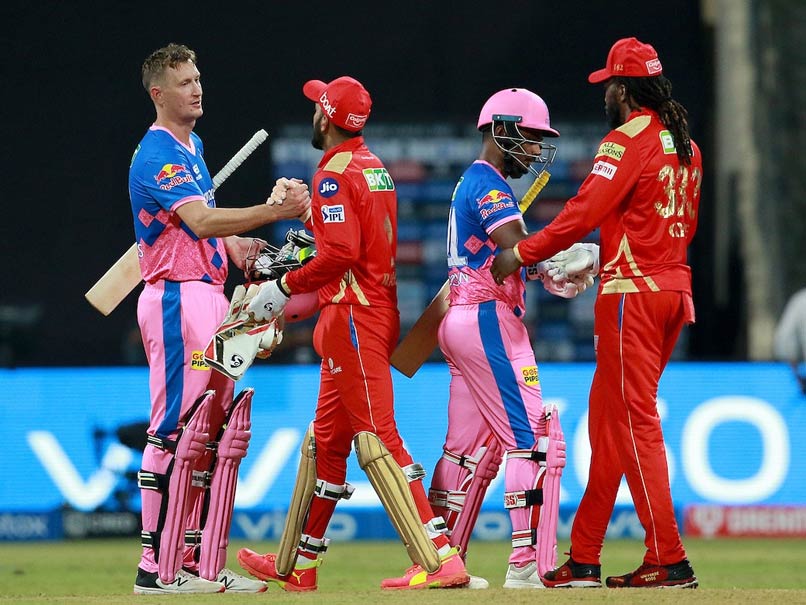 Sanju Samson played a heroic knock of 119 off just 63 balls that included 12 fours and a whopping seven sixes, but it still wasn't enough as Rajasthan Royals fell short by four runs in their chase of Punjab Kings' 221/6. The Rajasthan Royals skipper waged a lone battle as big names like Ben Stokes and Jos Buttler failed to come to the party. However, Samson might be left to rue one decision. In the final over of RR's innings, the wicketkeeper/batsman smacked a six off Arshdeep Singh on the fourth ball to bring the equation down to 5 needed to win off 2 balls. On the next ball, Samson hit the ball to deep extra cover but decided against taking the single and letting Chris Morris take the strike on the last ball. That effectively meant that RR were left needing a six to win the game, and a four to tie. Neither happened as Samson was caught at long-off, a heartbreaking end for the right-hander and his team.

After the game, social media was buzzing with fans, pundits and even cricketers discussing Samson's decision to farm the strike and not take the single.

Not necessarily. It's whether you think Samson is more likely to hit a 6 than Morris is to hit 4 or 6. The way Samson was hitting it I can see why he would have confidence in himself.

Greater possibility of Samson hitting a six in that form than new batsman in Morris hitting a four. Right call by Samson to keep strike last ball I thought.

Regardless of the result, I think Sanju was right to turn down the single there? Don't think he'd have got back for two, and he was much more likely to hit a four or six than Morris at that point#IPL2021

Great run chase, but Samson's brilliant one man show ends in agony. Should he have taken single off second last delivery? I think he should have trusted Morris who can olay shots too. Heartbreak for RR, Punjab will not be believing their luck

Would slightly disagree as morris's reaction said a lot. Samson must have been tired, and that was morris who hits big. May be a brain fade moment for samson, or i dont know. But irrespectively samson played really well.

Punjab Kings had their own stars on the day. Captain KL Rahul was just fantastic, scoring 91 off 50 balls amd he got good support from West Indie veteran Chris Gayle, who despite a shaky start managed to score 40 off 28 balls.

But arguably the game-changing knock came from Deepak Hooda. The big-hitting right-hander smashed six maximums and four fours in his knock of 64 off just 28 balls to power Punjab Kings to 221/6 in their allotted 20 overs.

Shivam Dube, who was released by RCB and picked up by RR for Rs 4.4 crore, hit out of the attack, giving away 20 runs off the only over he bowled. But the standout for RR in the bowling department was the young Chetan Sakariya, who took three wickets, giving away 31 runs off his four overs.

On the batting front, no other RR batsmen besides Samson got past even 25. Barring Stokes, who fell for a duck in the first over, the batsmen did get starts but failed to cash in, leaving Samson to pull off the impossible, which he nearly did.

Mohammed Shami and Arshdeep Singh impressed Punjab Kings with the ball. Shami went for 33 runs off his four overs, taking two wickets while Arshdeep had three wickets to his name for 35 off his four.

Chris Morris Arshdeep Singh Rajasthan Royals vs Punjab Kings, Match 4 IPL 2021 Cricket
Get the latest updates on ICC Women's Cricket World Cup 2022 and IPL 2022, check out the Schedule , Live Score and IPL Points Table. Like us on Facebook or follow us on Twitter for more sports updates. You can also download the NDTV Cricket app for Android or iOS.