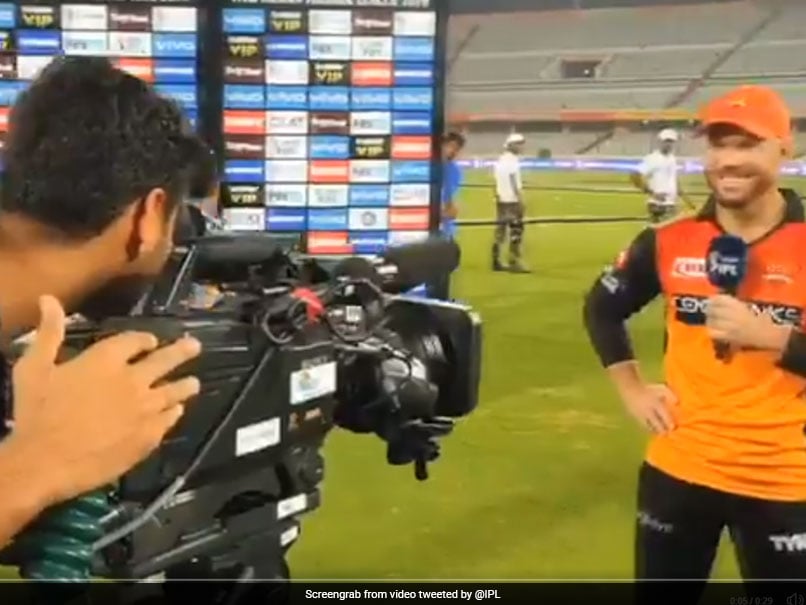 SunRisers Hyderabad (SRH) star opener David Warner, who bade farewellto Indian Premier League (IPL) 2019 on Monday night with his match-winning knock of 81 off 56 balls, recorded a warm message for the SRH family and helping him from behind the lens was his teammate Bhuvneshwar Kumar. Bhuvneshwar Kumar, who is known for his bowling variations, tried adding one more skill to his kitty by holding the camera to help Warner record his message for the SRH management, fellow players and the fans who supported him through thick and thin.

.@davidwarner31's message - straight from the to you!

What happens when a cricketer turns cameraman? Watch as @BhuviOfficial goes behind the lens to capture Warner's @SunRisers journey for https://t.co/sdVARQFuiM. By @28anand. #SRHvKXIP

The 32-year-old Warner, who is leaving to join Australia's pre-World Cup 2019 training camp, finished his IPL 2019 campaign on high, scoring 692 runs in 12 matches.

Warner who is a crucial part of Australia's World Cup 2019 squad thanked the SRH management for being generous and supporting him and giving him the opportunity to represent the franchise after his international ban, following “Sandpapergate” incident.

“I am very grateful for the opportunity to come here again and play and participate in the IPL. They (the team management) have been very, very good to me over the years, and my family. We can't thank them enough for their loyalty and generosity,” said Warner.

The southpaw also acknowledged the love and support he received from the SRH fans and urged them to keep supporting the team in future as well. Warner said, “To the fans, thank you very much. You guys are the backbone of our team. You guys always come out and support us in numbers and we really appreciate it. Keep making some noise for us because the boys can hear you.”

Rajiv Gandhi International Stadium, Hyderabad IPL 2019 Cricket Sunrisers Hyderabad vs Kings XI Punjab, Match 48
Get the latest updates on SA vs IND 2021-22, check out the Schedule and Live Score . Like us on Facebook or follow us on Twitter for more sports updates. You can also download the NDTV Cricket app for Android or iOS.