After this win SunRisers Hyderabad have 12 points from 12 games, while Kings XI Punjab have 10 points from as many matches. 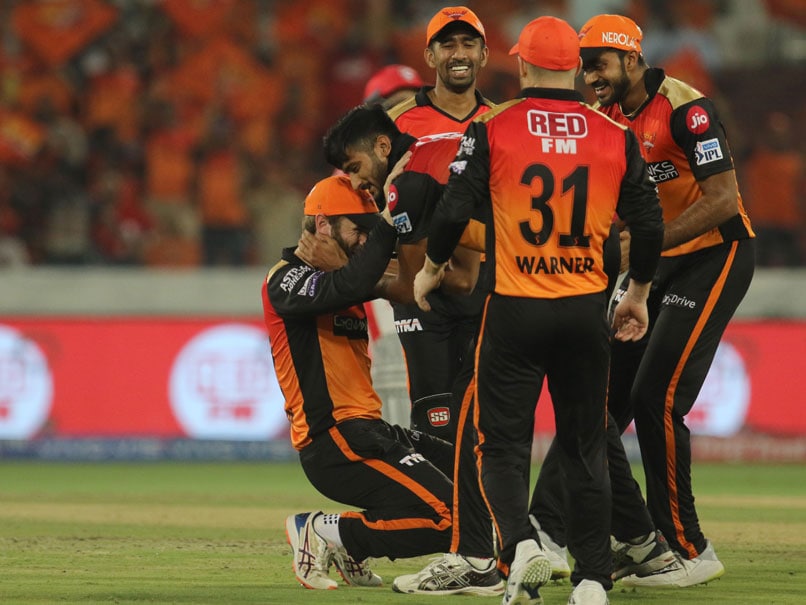 With this win, SRH have consolidated their fourth position in the table with 12 points from 12 games.© BCCI/IPL

David Warner signed off his IPL 2019 campaign in style, notching up his eight fifty of the season to help SunRisers Hyderabad (SRH) take a step closer towards qualifying for the play-offs with a comfortable 45-run win over Kings XI Punjab (KXIP) on Monday. Playing his last match of season before heading home for World Cup preparations, Warner struck a belligerent 81 off 56 balls with seven fours and two sixes to complete his IPL 2019 campaign with 692 runs, the highest so far in the tournament. Chasing the imposing total, K L Rahul (79 off 56, 4x4s, 5x6s) made a valiant effort with the bat but lacked support from the other end as Kings XI were restricted to 167 for eight.

By virtue of this win, SRH have consolidated their fourth position in the table with 12 points from 12 games, while Kings XI are at 10 points from as many matches. Both the teams have two more matches to go with KXIP still in the hunt.

KXIP needed a brisk start but they didn't get one, losing explosive Chris Gayle early. Gayle departed in the first ball of the third over, brilliantly caught by Manish Pandey off Khaleel Ahmed (3/40) with KXIP  scoreboard reading 11.

Thereafter, Rahul and Mayank Agarwal (27 off 18) added 60 off 39 balls to take Kings XI forward. But just when the partnership was looking threatening, Agarwal was holed by Vijay Shankar off Rashid Khan (3/21) in the ninth over. New man in Nicholas Pooran (21 off 10) played a short breezy knock before Bhuvneshwar Kumar took a beautiful catch at long-leg boundary off Ahmed to sent packing the batsman.

Rashid then came to the party and picked up two wickets -- David Miller (11 off 11) and skipper Ravichandran Ashwin -- in consecutive balls in the 13th over to stand in chance of registering a hat-trick which didn't materialise. From there on, the asking was tall for Rahul and debutant Prabhsimran Singh (16)and the former finally perished in the 19th over after a beautiful knock to shut the doors for Kings XI.

Earlier, Warner and Wriddhiman Saha (28 off 13) got Sunrisers off to a brisk start after being sent into bat. The duo took the Kings XI bowlers to the cleaners to pile up 77 runs of the first six overs of powerplay.

Warner made his intentions clear from the onset, hitting young Arshdeep Singh for two boundaries in the opening over and then followed it up with a six over long-off in Mujeeb Ur Rahman's next over. Mujeeb was in for some treatment as Warner hit two more boundaries in the spinner's next over and then Saha also found the fence to bring up Sunrisers' fifty in the fourth over. Saha then went after Mohammed Shami (2/36) and hit the pacer for a boundary and six off consecutive balls.

Saha's innings came to an end when he under-edged a Murugan Ashwin delivery to debutant Prabhsimran Singh behind the stumps. Saha shared 78 runs off 6.2 overs with Warner for the opening stand.

Warner continued in the same vein and notched up his eight fifty of the season with a boundary off Shami in the 12th over. Then came in in-form Manish Pandey (36 off 25) and he too played a quick knock in Warner's company.

Pandey, who struck three fours and a six, added 82 off 55 balls along with Warner before Kings XI skipper Ravichandran Ashwin (2/20) struck twin blows in the 16th over to remove both the set batsmen.

First Ashwin accounted for Pandey and then two balls later dismissed Warner, caught by Mujeeb at point of what was a tired-looking shot. Then skipper Kane Williamson (14 off 7) and Mohammad Nabi (20 off 10) also played short cameos towards the end.

Rajiv Gandhi International Stadium, Hyderabad IPL 2019 Cricket
Get the latest updates on ICC Women's Cricket World Cup 2022 and IPL 2022, check out the Schedule , Live Score and IPL Points Table. Like us on Facebook or follow us on Twitter for more sports updates. You can also download the NDTV Cricket app for Android or iOS.