India rode on centuries from veterans Yuvraj Singh and Mahendra Singh Dhoni to clinch a thrilling 15-run win against England in the second One-Day International at Cuttack. 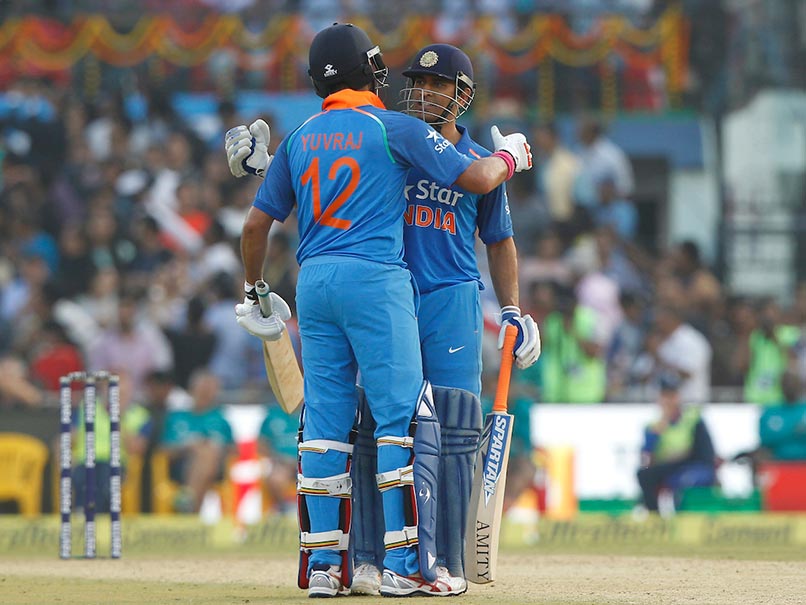 Yuvraj Singh and MS Dhoni both scored centuries vs England at Cuttack on Thursday.© BCCI

A prolific 102-run knock from England captain Eoin Morgan went in vain in the 2nd One-Day International against India in Cuttack on Thursday, as the hosts clinched a thrilling 15 run win to take an unassailable 2-0 lead in the series. England put on a brave face in response to India's 381/6, and came close to surpassing the total, before Indian bowlers got the job done in the finishing over to deny the visitors an improbable win. Jason Roy scored 82 for England, while Joe Root and Moeen Ali scored 54 and 55, respectively, while Ravichandran Ashwin was India's best bowler, returning with figures of 3-65 from his ten overs.

Needing 22 off the final over, seamer Bhuvneshwar Kumar kept his nerves and conceded a mere six runs, even as triumphant skipper Virat Kohli punched his fist in the air in jubilation.

Despite being set a mammoth target, England were in the game as long as Morgan was in the middle, but bowler Jasprit Bumrah put paid to the visiting side's hopes when he calmly ran out the England skipper in the non-striker's end after he backed up too far.

Earlier, backed by magnificent centuries from veterans Yuvraj Singh (150) and Mahendra Singh Dhoni (134), India reached a mammoth total of 381/6 in their stipulated 50 overs. While Yuvraj scored his first ton, 14th overall, since 2011, Dhoni struck his 10th hundred and first since 2013.

Yuvraj vindicated skipper Virat Kohli's faith in his ability and experience with a classic century as he, along with Dhoni, guided India out of a very dicey position to take them monumental total. The Punjab left-hander, brought back into the fray after three years in wilderness, once again proved his utility as he and former skipper Dhoni steadied India from a precarious position of 25/3 in 4.4 overs to a position of dominance, putting together a 256-run partnership for the fourth wicket.

India were in serious trouble after having been sent in to bat, having lost openers KL Rahul and Shikhar Dhawan as well as the in-form Kohli when Yuvraj and Dhoni came together.

Yuvraj's strokeplay was as aggressive and fluid as always. He played to all corners of the ground to score his highest ODI score, surpassing his previous best of 139.

Yuvraj was out of the ODI team for three years, having played his last match before this series in December 2013. Eyebrows were raised when he was called back into the side, but India's new ODI skipper Kohli was clear that he wanted experience in the middle-order to partner Dhoni in case such a need arose.

Later, Dhoni hammered his 10th ODI century. Him giving up of the limited-overs captaincy has not diminished his impact as was seen in Cuttack. He also crossed 4000 ODI runs in India during this innings when the Ranchi-born hit a boundary to reach 10 runs in the 14th over of the match to become only the second batsman after Sachin Tendulkar to score 4000 runs in India.

Dhoni, who relinquished his captaincy just before the three-match series, has played 110 50-over games in India to get to that milestone. He has scored more runs for India while playing abroad than at home. The former skipper has played 175 ODIs overseas to score 5125 runs with an average of 46.17 and a highest score of 109 not out.

At the same time, he has an average of 58 at home with a best of 183 not out which he scored against Sri Lanka at the beginning of his international career.

After the dismissals of the two, Kedar Jadhav (22), Hardik Pandya (19 not out) and Ravindra Jadeja (16 not out) chipped in to take India to a massive total.

Chris Woakes (4/60) started brilliantly to pick up Dhawan, Rahul and Kohli at the start but it was an India-show from thereon. Liam Plunkett also picked up two wickets but also ended up giving away 91 runs.

India now lead the series 2-0 against England after Kohli and Jadhav helped the hosts chase down a massive target of 351 in spectacular fashion in the first ODI on Sunday in Pune.