India vs England, 2nd Test: The first day of the Lord's Test was abandoned without a ball being bowled. 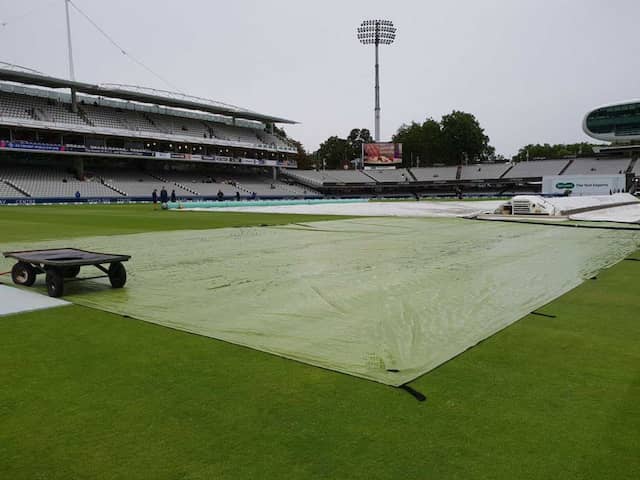 India vs England: The opening day was washed-out due to rain.© Twitter

Frustrating the two teams, incessant rain washed out the entire day one of the second cricket Test between India and England at Lord's at London on Thursday. The play was called off at 4.50 pm local time without a single ball being bowled. The match officials decided to take an early lunch, moving the scheduled break ahead by 30 minutes. Even after lunch, there was no respite from the rain and it went on throughout the afternoon. Finally, 45 minutes after the tea break, the umpires inspected conditions twice before declaring no play was possible today. The remaining four days will see 96 overs each to make up for the lost time. However, there is more rain forecast for this weekend and as such this match could see routine rain breaks. A few players, including Virat Kohli, Dinesh Karthik, Shardul Thakur, Jasprit Bumrah, Alastair Cook and Keaton Jennings, did make their way to the indoor nets to pass time. As the scheduled tea break came over, there was some weather clearance in the distance and the rain did slow down. The umpires came out and had a chat with the ground staff as well, who were regularly cleaning off water from the covers. England are leading the five-match series 1-0 after winning the first Test in Birmingham by 31 runs. England did name a first 12 on Wednesday, with 20-year-old Olliver Pope waiting to make his Test debut. India have not announced their playing XI but skipper Virat Kohli had said that he was tempted to play a second spinner. That thought might well have changed now, given the weather conditions and forecast ahead. (HIGHLIGHTS)

Sadly the rain has failed to stop so play has been abandoned on the end of Day 1 of #ENGvIND at Lord's.

For those with tickets for today, please see the reverse of your ticket for full refund details.#LoveLords pic.twitter.com/37Fc94Uqr9

21:20 IST: STUMPS on Day 1. The first day has been washed-out without a ball being bowled. The second day will begin with the toss, which was kept on hold through out the day. But the rain did not provide any respite for the proceedings to take place.

Update - Day 1 play has been called off here at @HomeOfCricket.#ENGvIND pic.twitter.com/hCY5Z2dHC6

21:15 IST: Sri Lankan legend Kumar Sangakkara is at Lord's. He displays the MCC Honorary Life Membership pass in his hands.

20:20 IST: Two sessions of the first day have been lost to rain. Tea has been called in the opening day of the second Test between India and England. Still no updates on the start of the match.

It's the time of the scheduled tea break on day one at Lord's, and there's still no sign of any start of the second Test. #ENGvIND LIVE https://t.co/e1I98c7CZY pic.twitter.com/RaJS1icd53

20:05 IST: All eyes on the ground staff now. They have come out in numbers to soak up the conditions and make it feasible for the match to get underway.

There's still some rain in the air at Lord's with the Groundstaff hard at work.

Hopefully it will clear soon and we can have some play

20:00 IST: Positive updates from Lord's: The ground staffs are inspecting the situation, we might see the toss happening in a few minutes from now. Stay tuned for further updates.

UPDATE - It's getting a lot brighter at the moment and the ground staff have gone out to see what can be done.

19:00 IST: Weather Update: The play looks unlikely to start anytime soon after the first session of the second Test in the opening day has been washed out. The drizzle continues to pour in. Further updates awaited. If the match gets underway, expect half an hour to be added.

England beat India by an innings and 159 runs

18:38 IST: Ben Stokes has wished England luck for the second Test. He has also made a special wish for debutant Ollie Pope. Chris Woakes and Moeen Ali are available for hosts England to replace unavailable Stokes.

Good luck to all the englandcricket lads today and for the rest of the week,always exciting seeing guys get there first opportunity,hope it goes for you well for you @opope32 #loveengland https://t.co/7y4yb2sLne

18:28 IST: Fresh weather update: According to ICC, after lunch, the overhead conditions are still not suitable for play to commence. The toss cannot be conducted either. So the wait continues on.

18:17 IST: Sam Curran, after a prolific bowling performance in the previous encounter, tries to find some sunshine from the balcony. Meanwhile, the delay to the toss continues.

17:55 IST: Over two hours of play lost so far. Still no signs of the rain God showing some mercy. As it looks so far, we can lose a bit more of time to be played on the opening day of the second Test. Further details awaited.

17:35 IST: Have a look at the top three run-scorer for India after the first Test at Edgbaston:

17:20 IST: Fresh Update: The ground staff are looking ready, they have taken a walk over the covers. The weather forecast suggests that the sky is expected to clear in due course. More updates awaited.

17:17 IST: The elegant looking players' dining room board at the historic venue of the Lord's Cricket Ground.

If you want to try the food yourself you can through the new Players' Dining Room Experience Tour!

17:09 IST: The lunch menu looks scrumptious. At least something to relish on for the players of both the sides, while rain continues to dominate the opening day of the second Test.

17:05 IST: Rain has forced for an early lunch on the opening day of the second Test between England and India. Drizzle, still on!

UPDATE - Early lunch has been taken here at @HomeOfCricket.

It is still drizzling out here.

17:00 IST: Over an hour of play lost in the opening day. The sky has still not dried up. More updates awaited.

16:45 IST: Cricket legend Sachin Tendulkar will ring the five-minute bell at the Lord's before the start of play on the opening day of the second Test.

16:35 IST: Glimpses of life in London, on a rainy day. Waiting for your home side, who have already pocketed a 1-0 lead in the five-match Test series, to play against the top ranked nation, India. But will the rain God allow?

Unfortunately the rain here at Lord's has failed to clear as yet, meaning the toss has been delayed.

In the meantime, you can follow our live blog here https://t.co/d73vbDTigu#ENGvIND#LoveLords pic.twitter.com/OKZz2w79HM

16:30 IST: Fresh update: The drizzle still continues, not pouring heavily but still so signs of the skies drying up.

16:15 IST: The entire cricket fraternity wants to get rid of the rain. We have waited for the what is expected to be a cracker of a contest to get underway, so has the former India off-spinner Harbhajan Singh!

16:05 IST: Former England cricketer Michael Vaughan predicts it's going to be a day for the bowlers on the opening day of the second Test. However, we are still to see the coin flip in the centre out here. Still drizzling!

16:00 IST: India skipper Virat Kohli, might fancy playing top-order batsman Cheteshwar Pujara in the second Test. Barring the captain and all-rounder Hardik Pandya, the Indian batting line-up struggled in the previous Test. A few changes on the cards for the hosts, looks surely on the cards.

15:55 IST: England are also expected to have a new slip cordon in absence of Dawid Malan, who has been replaced by Ollie Pope for the second Test. Malan had dropped India skipper Virat Kohli on a couple of occasion in the opening Test.

15:50 IST:  At the moment it looks like the 20-year-old Ollie Pope has to wait longer for his England Test debut. The hosts skipper Joe Root had confirmed his presence in the playing XI on Wednesday. Pope is expected to come in to bat at number 4.

15:43 IST: Latest weather update suggests there is a constant drizzle in London.

15:15 IST: Fresh updates from the Lord's: The covers are still on! Start of play delayed.

Covers still on here at Lord's, with the start of play delayed #ENGvIND pic.twitter.com/5cbxLsJ9XO

It's pouring down at the moment and the toss has been delayed due to the same.#ENGvIND pic.twitter.com/ZfkcpJQYPx

14:52 IST: Looks like the England cricketers had a nice, fun-filled morning with the kids. Much needed before the hectic 5 days in the second Test. The toss looks a bit delayed for now.

Waking up on the first day of the Lord's Test like... #ENGvIND pic.twitter.com/Akwvo4pYkE

There's a bit of drizzle in the air at Lord's at present, but fingers crossed it will soon clear and we can start on time #ENGvIND#LoveLords pic.twitter.com/iuQFRVBCyP

It's been a rainy morning here in London and looks like we'll have to play the waiting game for a bit.

14:10 IST: India captain Virat Kohli shares his views ahead of the second Test.

14:03 IST: India lost the first Test of the five-match series by 31 runs and will look to bounce back.

14:00 IST: Hello and welcome to the Live coverage from the opening day of the second Test between India and England at Lord's.

In order to win the second Test, the batsmen -- Ajinkya Rahane, Hardik Pandya, Vijay, Dinesh Karthik -- need to click in unison because the bowlers are doing their job handsomely. Talking about the bowling, in both the innings off-spinner Ravichandran Ashwin scalped four and three wickets respectively. He was well supported by pacers Ishant Sharma and Mohammad Shami. Umesh Yadav was also impactful. Pacer Jasprit Bumrah has been ruled out of the second Test as he has not fully recovered from a left thumb injury, bowling coach Bharat Arun confirmed on Tuesday. Despite that the team management could make a few changes, bringing in a second spinner to add more firepower, depending on the nature of the wicket at Lord's.

England, on the other hand, will be without their star all-rounder Ben Stokes and batsman Dawid Malan. Stokes, who picked up four wickets during India's second innings, is trying to clear his name in court after being charged with affray following a brawl in September 2017, while Malan has been dropped due to poor performance. Malan was replaced by 20-year-old Ollie Pope, who is set to make his debut.

England would also like to see an improved batting performance. They were reduced to 80 for seven in the second innings before young all-rounder Sam Curran's attacking 63 rescued them as they reached 180.

Ishant Sharma Live Score Live Cricket Score Lord's, London England vs India, 2018 Live Blogs Cricket England vs India, 2nd Test
Get the latest Cricket news, check out the India cricket schedule, Cricket live score . Like us on Facebook or follow us on Twitter for more sports updates. You can also download the NDTV Cricket app for Android or iOS.