Ravi Shastri had come under fire for his comments surrounding India's series loss to hosts England. 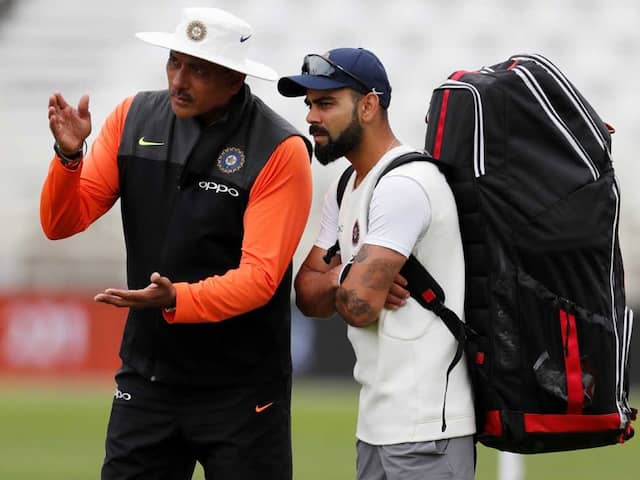 Ravi Shastri said the Indian team is heading in the right direction despite the 1-4 loss to England.© Reuters

India chief coach Ravi Shastri has come under fire from some quarters of the Indian media as well as the cricket fraternity for his comments during India vs England Test series. Despite the four defeats to England in the Test series, Ravi Shastri was bullish in his defence of the Indian team's performance. He defended the current team's performance overseas, suggesting that they were better than that of previous teams. These comments didn't go too well and the Indian coach received a lot of flak. Reacting to the criticism, an unperturbed Shastri said that he is the "last one to press the panic button when I see so many positives".

"Last one to press the panic button when I see so many positives. I head back home with a very positive state of mind. I know exactly what we do. I know exactly and clearly where the team is heading - it is heading in the right direction," Shastri was quoted as saying by ESPNcricinfo.

Shastri said he was not worried about the criticism coming the way of the coaching and support staff, saying people are entitled to their opinions.

"People are entitled to their opinions. As long as we know the job we are doing and we are honest to our jobs, as long as support staff we are helping players channelise the energies in the right direction, we are not worried about what critics say," said Shastri.

Shastri had made his earlier comments before the start of the final Test, which India went on to lose by 118 runs, thereby going down 1-4 to the hosts.

"If you look at the last three years, we have won nine matches overseas and three series. I can't see any other Indian team in the last 15-20 years that has had the same run in such a short time," he said.

Former India captain Sourav Ganguly, who was part of the committee that appointed Shastri last year, dismissed the coach's claims as "immature", telling an Indian TV channel that Shastri must improve the team.

Sunil Gavaskar pointed out that Indian teams of the 1980s had won series in England and the West Indies -- as well as a series victory in England as recently as 2007.

"The best travelling teams are made by performances on the ground and not by sitting in the dressing room and talking about it," added former Test opener Virender Sehwag.

The tours of South Africa, England and Australia were being viewed upon as the real test of this Indian team and Virat Kohli's captaincy following the winning run at home that earned Team India the No.1 Test ranking.

India lost the three-Test series in South Africa 1-2, have lost the 5-match Test series 1-4 with the Australia tour scheduled for December.

Virat Kohli Ravi Shastri England vs India, 2018 Cricket
Get the latest Cricket news, check out the India cricket schedule, Cricket live score . Like us on Facebook or follow us on Twitter for more sports updates. You can also download the NDTV Cricket app for Android or iOS.