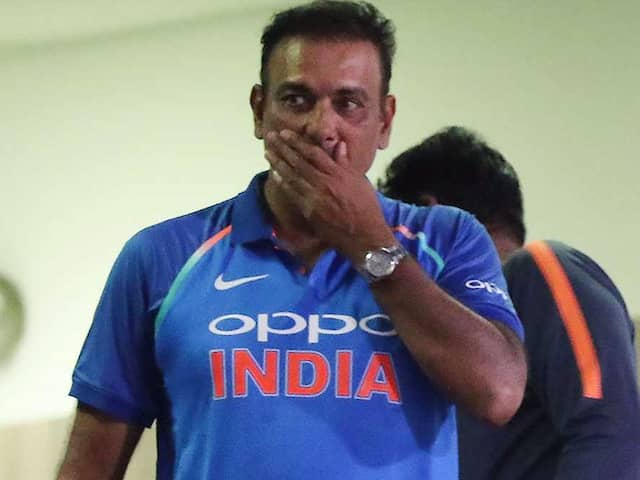 Ravi Shastri was criticised by the media and cricket fraternity.© AFP

India coach Ravi Shastri was criticised by the media and cricket fraternity after his side faced a humiliating 1-4 defeat in the recently-concluded Test series against England. As a result, top ranked India also dropped 10 points in the latest Test ranking released by the International Cricket Council (ICC). The defeat comes after the loss suffered in South Africa earlier this year, under the coaching of Ravi Shastri. The media and cricket fraternity didn't take kindly to Shastri's take that suggested that this Indian team was better than prior sides, its poor run overseas notwithstanding.

Prior to the final Test at the Oval -- which India lost by 118 runs -- Shastri had raised eyebrows with lavish praise for India.

"If you look at the last three years, we have won nine matches overseas and three series. I can't see any other Indian team in the last 15-20 years that has had the same run in such a short time," he said.

India had won two recent series in Sri Lanka and one in the West Indies.

Former India captain Sourav Ganguly, who was part of the committee that appointed Shastri last year, dismissed the coach's claims as "immature", telling Indian television Shastri must improve the team.

Sunil Gavaskar pointed out that Indian teams of the 1980s had won series in England and the West Indies -- as well as a series victory in England as recently as 2007.

"The best travelling teams are made by performances on the ground and not by sitting in the dressing room and talking about it," added former Test opener Virender Sehwag.

"Self-belief is a wonderful quality; but being caught in the bubble of your own publicity is self-defeating," said Sambit Bal, chief editor of cricket website Cricinfo, on Twitter.

"India had their moments but the scorecards say 4-1 and India weren't as good as they should have been," said noted commentator Harsha Bhogle. "This is two overseas disappointments in a row now."

Asked about Shastri's pre-match comments, Kohli said: "We have to believe we are the best side, why not?"

In a tetchy exchange, Kohli turned the question on a journalist, who responded "I am not sure". Kohli hit back: "You're not sure. That is your opinion. Thank you."

Under pressure Ravi Shastri, who will next guide India at the Asia Cup 2018, will be under severe scrutiny to help his side perform well without the services of their regular skipper Virat Kohli.

India will then host two Tests at home against the West Indies, before heading for an overseas Test series in Australia.