On Friday, Indian board's Twitter handle posted a video of Rohit Sharma and Ravindra Jadeja doing the 'heads up challenge'. 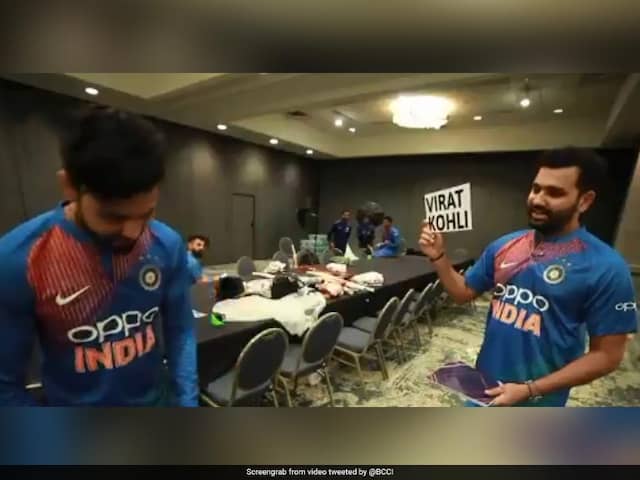 Virat Kohli and Rohit Sharma have made headlines in recent times for a reported rift between the two. However, before leaving for the West Indies, Virat Kohli rubbished the rumours, calling them "baffling". On Friday, Indian board's Twitter handle posted a video of Rohit Sharma and Ravindra Jadeja doing the 'heads up challenge', which seems to be a game of dumb charades. While Jadeja and Rohit play the guessing game, India captain Virat Kohli can be seen looking on. The first name that came up in the challenge was that of Jasprit Bumrah which Rohit managed to guess in a matter of seconds but the next name -- Virat Kohli -- was not so easy.

Jadeja copied Virat Kohli's routine before facing a ball and mimicked him leaving the ball, but Rohit looked confused. However, after getting a few more clues from Jadeja, Rohit managed to guess Virat Kohli's name.

The Indian captain, sitting metres away, was all smiles and asked the duo, "kya kiya".

WATCH @ImRo45 take the Heads Up Challenge with @imjadeja

This one's a laugh riot pic.twitter.com/0dJxaY4nIf

The Indian team is currently on tour of the West Indies. India won the Twenty20 International (T20I) series 3-0.

The first match of the One-Day International (ODI), however, had to be abandoned due to inclement weather at the Guyana National Stadium on Thursday.

Only 13 overs were bowled after the home side were put in to bat when India captain Virat Kohli won the toss, with the West Indies reaching 54 for one before rain drove them off the field.

Having already started two hours late because of morning showers, the further rain interruptions during the brief innings ended any hopes of a result and any lingering prospect of play was washed away by the latest downpour in mid-afternoon.

Two more ODI matches remain, which will be followed by a two-match Test series.

Virat Kohli West Indies vs India 2019 Cricket
Get the latest Cricket news, check out the India cricket schedule, Cricket live score . Like us on Facebook or follow us on Twitter for more sports updates. You can also download the NDTV Cricket app for Android or iOS.