India vs West Indies: Rain Washes Out 1st ODI After 13 Overs Of Play

West Indies posted 54/1 in 13 overs against India before the rain intervened and the first ODI was eventually called off due to persistent rain in Guyana. 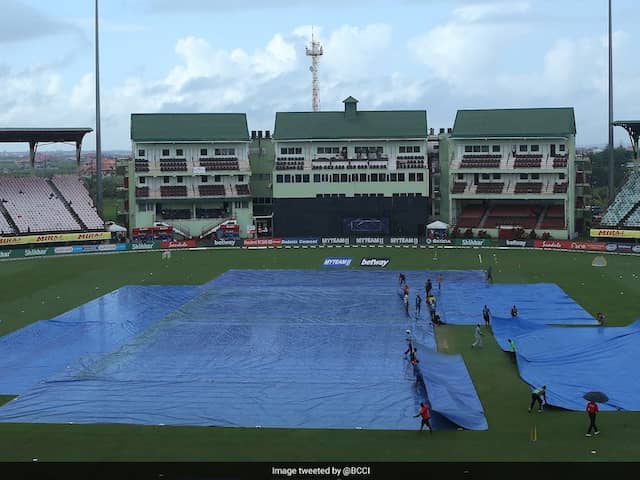 India vs West Indies 1st ODI was abandoned due to rain in Guyana.© Twitter

India's first One-Day International against the West Indies ended in a no result due to heavy rain in Guyana on Thursday. Only 13 overs were bowled in the match as rain continued to cause delays on regular intervals. The match was reduced to a 34-over per side game after the first rain interval but the officials called off the match after the second rain break. The West Indies lost just one wicket of Chris Gayle who played a slow inning of four runs off 31 deliveries.

The stop-start match, which was reduced to 34-over-a-side, was abandoned after a second rain interruption. More than an hour and a half later, the umpires decided to call off the match. Opener Evin Lewis and Shai Hope were batting on 40 and 6 respectively when the match was called off after Indian captain Virat Kohli won the toss and asked the West Indies to bat.

The match was already reduced to 43-over-a side even before a ball being bowled as the wet outfield due to rains had forced the toss to be delayed. The match began two hours later than the original 7pm IST start.

West Indies made a quiet start with Bhuvneshwar Kumar and Mohammed Shami exploiting the conditions well to tie down Gayle and Lewis before the first rain interruption.

India did not take the DRS when Lewis looked plumbed in front of wicket in the fourth over off the bowling of Mohammed Shami. Replays showed the ball would have gone on to hit the leg stump but India did not opt for a review. Lewis was on 1 then.

The home side had scored 9 for no loss in 5.4 overs at the first rain break and the match was about to be resumed 30 minutes later but the wet area near the bowlers' run-up led to another delay of more than half an hour.

The Indian fielders and the two West Indies batsmen -- Gayle and Lewis -- came out to the ground but Kohli was seen having a discussion with the umpires.

Play did not start immediately as the umpires reckoned the ground staff need more time to get the ground ready. Kohli and some other Indian players were seen shaking their legs for a while, moving to the tunes of the DJ at the venue.

The players later walked off the field and the ground staff were seen spraying a lot of sawdust on the wet areas.

The umpires made another inspection and after more than an hour's interruption, the match resumed for a 34-over-a-side affair.

Gayle and Lewis picked up steam after the long interruption. Lewis hit Khaleel Ahmed for 15 runs with a six and two fours in the eighth over but the introduction of wrist spinner Kuldeep Yadav put some brakes on the West Indians batsmen.

Kuldeep gave India the breakthrough as he dismissed danger-man Gayle who dragged the ball onto his stumps. Hope came in two overs later, but rains also came back to force the players to the dressing room once again.

The second ODI will be played in Port of Spain on Sunday.

India Cricket Team West Indies vs India 2019 Cricket West Indies vs India, 1st ODI
Get the latest Cricket news, check out the India cricket schedule, Cricket live score . Like us on Facebook or follow us on Twitter for more sports updates. You can also download the NDTV Cricket app for Android or iOS.