Rohit Sharma asked fans, who were wearing his ODI jersey, to showcase their dance moves. 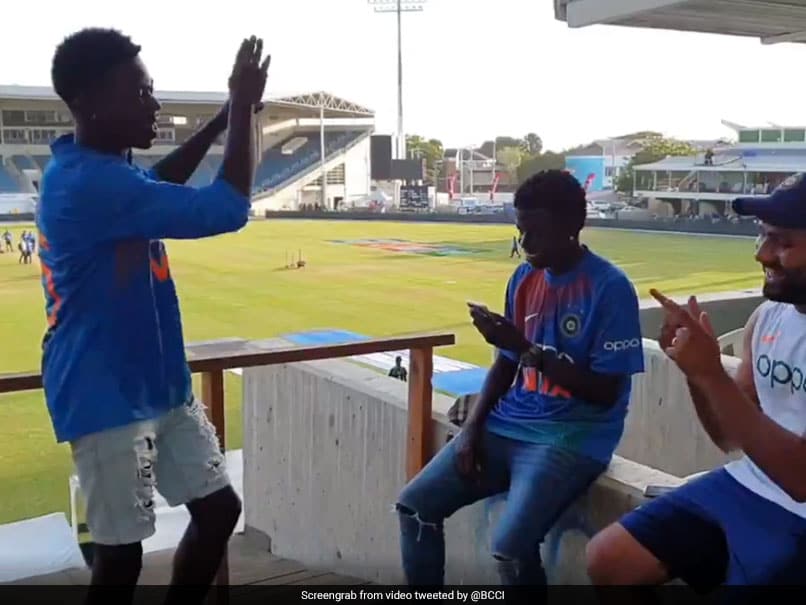 Rohit Sharma, after India swept the two-Test series against the West Indies, decided to celebrate the win in a unique style. In a video posted by the Board of Control for Cricket in India (BCCI) on Twitter, India's limited-overs vice-captain is seen pulling out two local fans from the crowd in Jamaica. "This is awesome from @ImRo45 when he randomly pulled out two of his loyal fans from the crowd in Jamaica #TeamIndia," BCCI captioned the video. The Mumbai-batsman then asked both the fans, who were wearing Rohit's ODI jersey, to showcase their dance moves.

This is awesome from @ImRo45 when he randomly pulled out two of his loyal fans from the crowd in Jamaica #TeamIndia pic.twitter.com/PqRV1xtjgH

Rohit's performance on the tour was indifferent as he failed to impress in the limited-overs leg while couldn't break into the playing XI in the two Test matches.

Kohli's team selection proved right as India didn't lose a single game across format on the tour. They swept the three-match Twenty20 Internationals (T20I) series and the Test series while took the One-day International series 2-0, after the first match was washed out.

However, prior to the tour, Rohit had an exceptional World Cup 2019 where he finished as tournament's leading run-scorer, with 648 runs. Rohit scored five centuries in the tournament thus breaking the record of maximum number of centuries in one edition of World Cup. He also equalled Sachin Tendulkar's total tally of six centuries scored in World Cups.

India will next play South Africa at home, starting September 15. The tour comprises three T20Is and as many Test matches.

Rohit is part of the three T20Iswhile the squad for the Test series is yet to be announced.

India Cricket Team Sabina Park, Kingston, Jamaica West Indies vs India 2019 Cricket
Get the latest updates on IPL Auction 2023 and check out  IPL 2023 and Live Cricket Score. Like us on Facebook or follow us on Twitter for more sports updates. You can also download the NDTV Cricket app for Android or iOS.