Hanuma Vihari scored 289 runs, including one century, in the two-Test series with the West Indies. 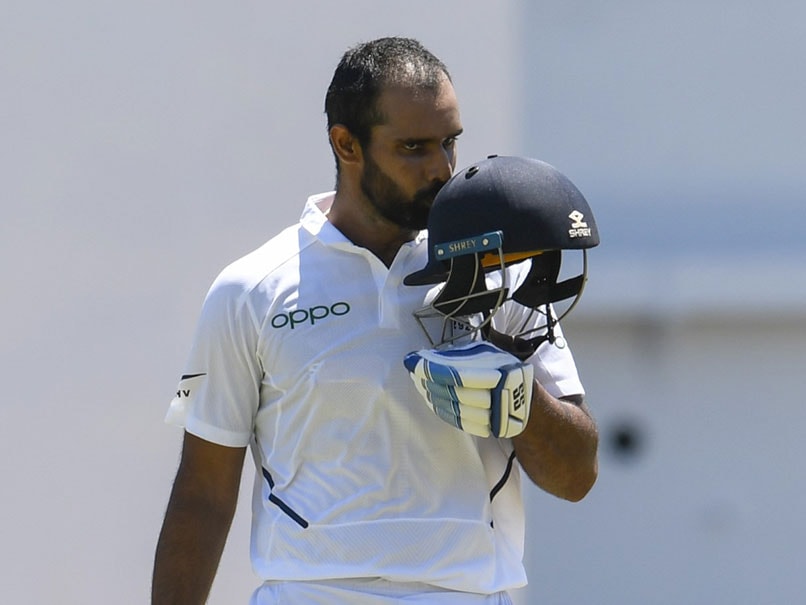 Hanuma Vihari, who accumulated 289 runs including a century in two-Test series against the West Indies, credited head coach Ravi Shastri for all success in the Caribbean. Batting at number six, Hanuma Vihari scored a 111-run knock and followed it up with an unbeaten half-century as India registered a 257-run win in the second Test to complete a 2-0 whitewash against the West Indies on Monday. Speaking to fielding coach R Sridhar in a video posted by the BCCI, Hanuma Vihari said: "He (Shastri) was talking about flexing my knees a little bit, I was a little upright in the first innings, so flexing my knees meant I could move my foot both on front and back foot.

"It worked out very well and a lot of credit should go to him," he added.

The 25-year-old emerged as India's top run-getter against the West Indies in the two-match Test series with 289 runs.

"I relish batting under pressure because that is the challenge you have to accept as a batsman and these situations brings the best out of me," said the Andhra batsman, who scored a 93 in the first Test in North Sound.

"I feel I try to focus on what the situation is and have a certain game plan and I was fortunate enough to have good partnerships with Jinx (Ajinkya Rahane). He batted beautifully as well."

Kohli has been lavish in his praise of Vihari, calling him his biggest find from the tour in which India won in all three formats.

Vihari said he was confident of a good outing during the two-match Test series against the West Indies as he had spent enough time on these pitches during the last two months with the India A team.

"I was in really good space. I have been in Caribbean for last two months, I have been practicing and playing matches on this wicket," he said.

"So I was really confident and I think I played well in the practice match and it gave me that extra boost. I was looking forward to this series and I am happy it went well."

In his first year in international cricket, Vihari has played six Tests. In between, he seems to have lost a bit of hair, got married and also scored 6000-plus first class runs while being just 25 years of age.

"I started my first-class cricket quite early and that's why I could score 6000 runs. I don't know about the hair, may be too much batting from childhood. That experience will count, batting for nine years in first class cricket, and it helped me in pressure situation," Vihari said.

West Indies Cricket Team Hanuma Vihari West Indies vs India 2019 Cricket West Indies vs India, 2nd Test Ravi Shastri
Get the latest updates on IPL Auction 2023 and check out  IPL 2023 and Live Cricket Score. Like us on Facebook or follow us on Twitter for more sports updates. You can also download the NDTV Cricket app for Android or iOS.