Jasprit Bumrah stood out with a hat-trick and two five-wicket hauls in India's 2-0 clean sweep against the West Indies. 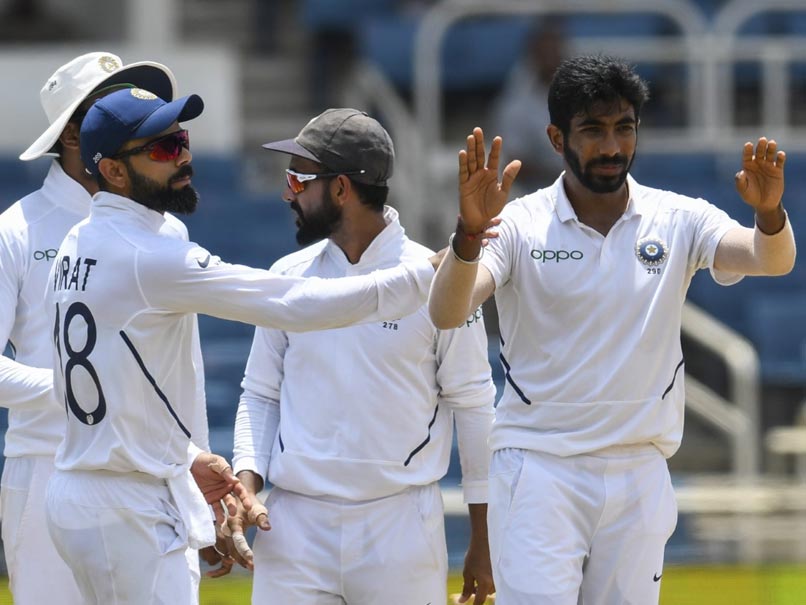 Virat Kohli said Jasprit Bumrah has proved to be invaluable in all formats with his work ethic.© AFP

Virat Kohli was full of praise for fast bowler Jasprit Bumrah, who stood out with a hat-trick and two five-wicket hauls in India's 2-0 clean sweep against the West Indies. The 25-year-old bowler became only the third Indian to claim a hat-trick, in the second and final Test of the series which India won by 257 runs in Jamaica on Monday. Following the match, captain Virat Kohli remembered the sight of Jasprit Bumrah's "lethal spells" from the slips cordon, adding that it is difficult not to feel for the batsmen.

"There is not much you can say about Jasprit and the way he has been bowling. All we can say is that we are really lucky to have him in our team. Very rarely do you find a pack of bowlers who are hunting together, bowling for each other, bowling in partnerships," Kohli said.

"When he (Bumrah) gets some kind of momentum then you can see what he can do with 5-6 overs with the new ball in the first innings. I haven't seen many more lethal spells than that. Standing in slips, you feel for the batsmen," he added.

The India skipper feels Bumrah is the most complete bowler in world cricket right now and with his work ethic, the speedster has long shed the tag of being just a T20 specialist.

"He (Bumrah) definitely wants to be the best bowler in the world. He has moulded his life like that, he has moulded his discipline, his work ethic. The way he trains, the way he takes care of his diet, he has absolute control over what he is doing," he said.

Bumrah was called a T20 specialist when he first burst into the scene but Kohli said the 25-year-old pacer has proved to be invaluable in all formats with his work ethic.

"He confuses with his angles, swing and pace. I think he is the most complete bowler in world cricket right now," Kohli said.

"It's really pleasing to see a guy who was tagged a T20 specialist, he came and took over the ODI scene and now Test cricket. He is proving people wrong that there is a set template for every format," he added.

India's next stop in the ICC World Test Championship is a three-match series against South Africa at home starting October 2 at Visakhapatnam.

Jasprit Bumrah West Indies vs India 2019 Cricket West Indies vs India, 2nd Test
Get the latest updates on ICC Women's Cricket World Cup 2022 and IPL 2022, check out the Schedule , Live Score and IPL Points Table. Like us on Facebook or follow us on Twitter for more sports updates. You can also download the NDTV Cricket app for Android or iOS.