Jasprit Bumrah has claimed one hat-trick and two five-wicket hauls in the three innings he has bowled in during the Test series with the West Indies so far. 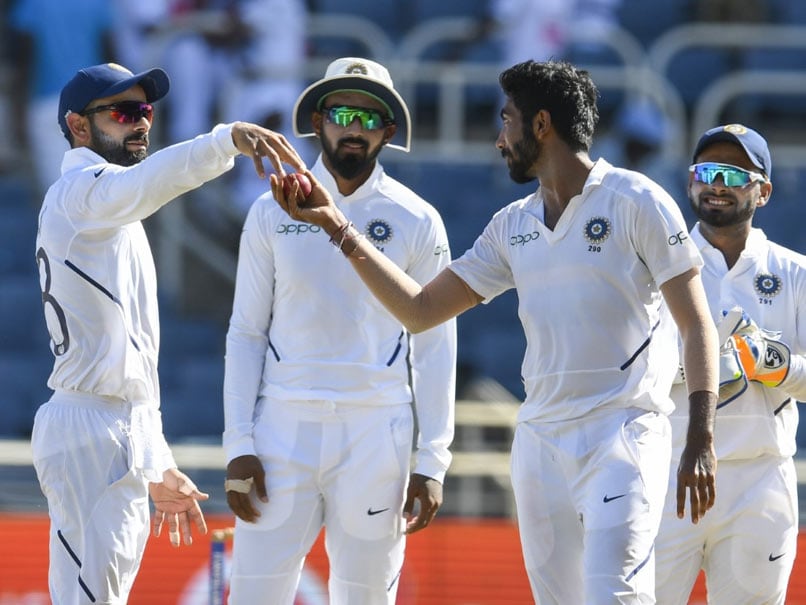 Jasprit Bumrah put his best foot forward in India's two-Test series against the West Indies, claiming a hat-trick and two five-wicket hauls in three innings so far. The 25-year-old credited skipper Virat Kohli for his success in the Caribbean, adding that the "captain's confidence" gives a lot of self-belief to him and other bowlers in the number-ranked Test team. "The captain's confidence gives you a lot of self-belief. When you bowl, you can express yourself, you can try whatever you want to do. That gives you a lot of confidence, not only me but each and every bowler is being backed by him so much," Jasprit Bumrah told reporters after the third day's play in Jamaica on Sunday.

"As a bowling unit we are very happy and then we have the freedom to do what we want," he added.

Bumrah said experience of bowling with Duke balls in English conditions has helped him to succeed in the ongoing Test tour.

Bumrah, who has been in sensational form, claimed a five-wicket haul (5/7) in the first Test in Antigua. He followed it up by becoming only the third Indian to take a Test hat-trick in the ongoing second Test. Bumrah returned with excellent figures of 6/27 from 12.2 overs to help India bundle out the West Indies for 117 in the first innings.

India inched closer to a series sweep on day three by setting West Indies a massive target of 468 runs. In reply the hosts ended the day on 45 for 2.

Asked about India's strategy, Bumrah said the plan was to create pressure in the first innings.

"You have to assess the wicket, what are the conditions, what works here. Here the wicket has a lot more bounce. In such bouncy wickets you can become greedy and bowl short but you shouldn't do that. You should look to bowl in good areas and create pressure and try and bowl full. That was the plan going into the first innings," he said. The 25-year-old pacer said he is always focussed on contributing to the team's cause.

"I always look at the team goals, if we win the match and I don't have any wickets it's fine. My aim is to contribute to the team's success, be it by taking wickets or creating pressure," Bumrah said.

Bumrah said his aim always is to pick the brains of his experienced pace colleagues' to further hone his skills.

"We have done a lot of hard work and last year we played a lot of away matches. Lot of camaraderie is there, we back each other. Even when things are going well we discuss what we can do better. We have a good relationship," he said.

"Ishant has played a lot more cricket than all of us, (Mohammed) Shami has played a lot, I'm the new guy, so I try and ask questions. I ask them, they've played here before, so 'what works in different conditions?' 'If the wicket is not doing anything what should we do?' What different plans are to be there," the 25-year-old said.

Virat Kohli West Indies vs India 2019 West Indies vs India, 2nd Test Cricket
Get the latest updates on IPL Auction 2023 and check out  IPL 2023 and Live Cricket Score. Like us on Facebook or follow us on Twitter for more sports updates. You can also download the NDTV Cricket app for Android or iOS.