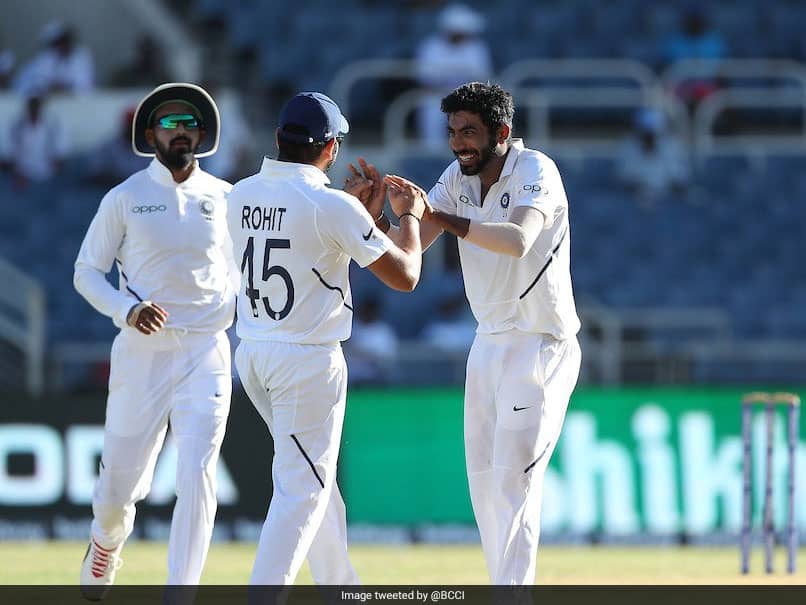 Jasprit Bumrah returned with figures of 6/16 in 9.1 overs.© Twitter

Jasprit Bumrah became third Indian after Harbhajan Singh and Irfan Pathan to claim a hat-trick in Test cricket as he dismissed Darren Bravo, Shamarh Brooks and Roston Chase off consecutive deliveries on the second day of the second Test between India and the West Indies in Jamaica on Saturday. The longest format of the game hadn't seen a hat-trick in over two years with England's Moeen Ali the last bowler to do so against South Africa at The Oval in July 2017. Fans on Twitter went bonkers after Jasprit Bumrah claimed a hat-trick and joined the celebration with hilarious memes on Twitter.

Cricket fans are searching for a bowler who is better than #Bumrah pic.twitter.com/OufYMOLjaX

Bumrah to haters after taking hattrick:

#Bumrah #INDvsWI
When someone says -
Bumrah and Best bowler in the world.
Me - pic.twitter.com/I0xznxejZO

After being asked to bat, India rode on a century by Hanuma Vihari to score 416 runs.

Bumrah then added to the West Indies' misery with quick blows as the hosts found themselves in heaps of trouble.

The 25-year-old right-arm fast bowler removed opener John Campbell for two, early in the seventh over. However, Bumrah continued to torment the Windies batsmen, especially in the ninth over, in which he took the scalps of Bravo, Brooks and Chase to complete his hat-trick.

Bumrah returned with figures of 6/16 in 9.1 overs and reduced the West Indies to 87/7 at stumps on Day 2, 329 runs behind India's first innings total.

After the match, Bumrah credited Virat Kohli for his hat-trick as the Indian captain opted for a timely review.

"I was not very sure of the appeal. I thought it was bat. So, I didn't appeal so much but it was a good review in the end. So, I think I owe that hat-trick to the captain," Bumrah told Kohli, in a video posted by the BCCI on Twitter.

Bravo was caught by KL Rahul at second slip, Brooks trapped leg-before -- a decision he reviewed but was shown to be correct -- and then Indian captain Kohli reviewed a not out verdict by standing umpire Paul Reiffel to an appeal against new batsman Chase.

That review via television replays and ball-tracking technology showed the ball to be striking leg-stump, resulting in a reversal of the decision and triggering celebrations among the Indian players at Bumrah's historic achievement.

Jasprit Bumrah West Indies vs India 2019 Cricket West Indies vs India, 2nd Test
Get the latest updates on IPL 2021, IPL Points Table , IPL Schedule 2021 , live score . Like us on Facebook or follow us on Twitter for more sports updates. You can also download the NDTV Cricket app for Android or iOS.