India defeated the West Indies by 257 runs to win the series 2-0. 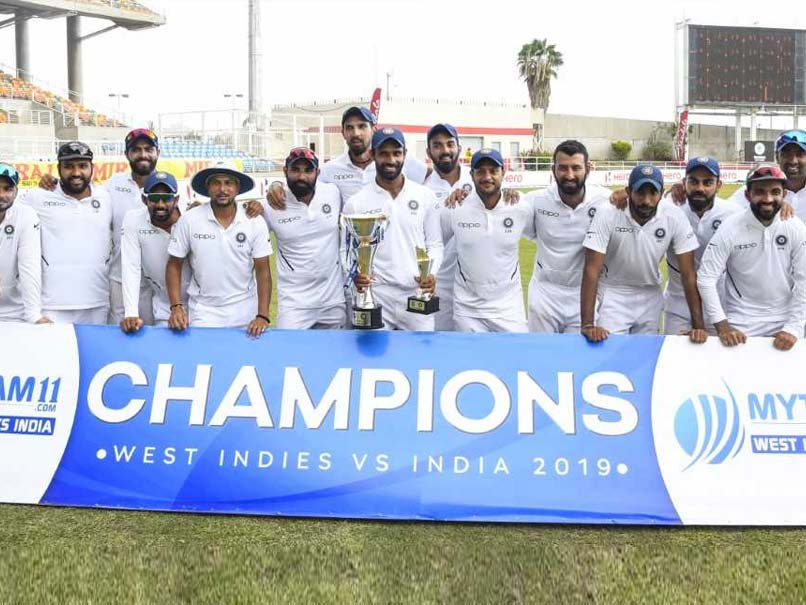 India ticked all the boxes in the Test series against West Indies.© Twitter

India produced a top-notch bowling performance in a clinical 257-run demolition of the West Indies in the second Test as a 2-0 series victory put them on top ofICC World Test Championship points table. The victory was 28th in Tests for Virat Kohli making him the most successful Indian captain in the traditional format of the sport. Chasing a near-impossible target of 468, West Indies batting once again failed to show stomach for a good fight as they caved in for 210 in 59.5 overs, well inside the fourth day.

It was one of the most satisfying tours for skipper Virat Kohli as his team had clean sweep in two formats (3-0 in T20Is and 2-0 in Tests) while poor weather robbed them in another format (2-0 in 3-match ODI series).

Such was India's dominance in the two Test matches that West Indies couldn't even cross 250 in any of their four innings and the only half-century was scored by Shamarh Brooks (50) in this game.

The win took India's points tally to 120 after two games and they lead the nine-team table even though Pakistan, Bangladesh and South Africa are yet to begin their bilateral campaign as a part of the championship.

As the dark clouds hovered over the Sabina Park during the post-lunch session, the Indian bowlers upped the ante getting four wickets in the first hour after lunch to ensure that there isn't any inordinate delay in achieving the desired result.

There were a few gains from the series and the biggest being Hanuma Vihari's performance as a potent middle-order option with a century and two half-centuries.

The areas of concern will be Rishabh Pant's shoddy show with the bat and KL Rahul's repeated failures in the red-ball format that could lead to selectors looking at other option when South Africa come calling later this month.

As far as the match is concerned, the writing was on the cards and skipper Virat Kohli effected a brilliant run-out in the post lunch session. Starting the post-lunch session at 145 for 4, West Indies lost five wickets in just over an hour adding only 65 runs as a physically indisposed Darren Bravo didn't come out to bat.

In the post-lunch session Jermaine Blackwood (38) got a a delivery from Bumrah that pitched on length and moved a shade to take an outside edge which was gobbled up by Rishabh Pant.

The Sharmarh Brooks (50)-Blackwood partnership yielded 61 runs for the fifth wicket. Brooks was lucky to survive in the pre-lunch session but not so much in the post-lunch session when Kohli's quick reflexes brought about his downfall.

Brooks pushed one towards point and started to amble across as Kohli sprinted from his cover position and picked the ball and in turned in the same motion to get his direct throw on target. Jahmar Hamilton's (0) debut just got worse with Jadeja snuffing him out in the slips and then Shami removed Rahkeem Cornwall with an off-cutter that got the inside edge of his bat to Pant behind the stumps as Shami and Jadeja completed the formalities.

India Cricket Team West Indies vs India 2019 West Indies vs India, 2nd Test Cricket
Get the latest updates on IPL Auction 2023 and check out  IPL 2023 and Live Cricket Score. Like us on Facebook or follow us on Twitter for more sports updates. You can also download the NDTV Cricket app for Android or iOS.