Ishant Sharma and Umesh Yadav took three wickets each to bundle out West Indies A for 181 before India extended their lead to 200 runs at stumps on Day 2 of the three-day practice match. 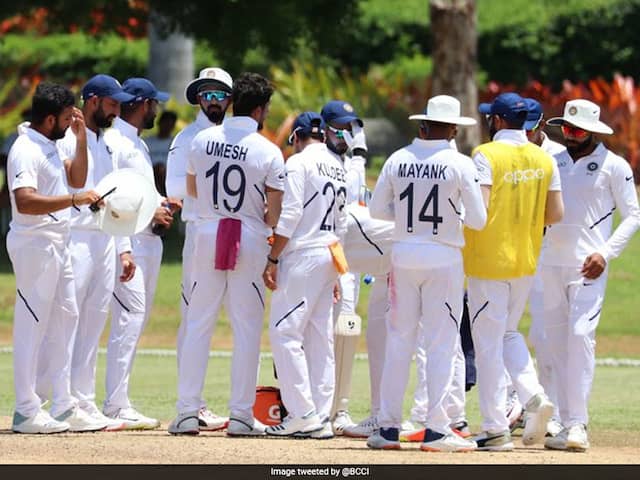 Indian bowlers impressed on Day 2 of the three-day practice match against West Indies A.© BCCI/Twitter

Cheteshwar Pujara's century along with Rohit Sharma's gritty knock was the highlight on the opening day but the Indian bowlers stole the spotlight on Day 2 with impressive performances from the pace duo of Ishant Sharma and Umesh Yadav. The two fast bowlers along with left-arm spinner Kuldeep Yadav took three wickets apiece to pack off West Indies A for a paltry 181. Despite losing Mayank Agarwal early in the second innings, India went on to extend to 200 runs at stumps on Day 2 in the three-day practice match at the Coolidge Cricket Ground in Antigua.

For West Indies A, opener Kavem Hodge fought a lone lone battle, playing a gritty 51-run knock in what was otherwise a disappointing batting performance from the hosts.

Apart from Hodge and Jahmar Hamilton (33), none of the other batsmen occupied the crease for too long and were unable to stitch any significant partnerships.

Ishant got the early breakthroughs, Umesh struck through the middle and Kuldeep claimed wickets towards the end. All-rounder Ravindra Jadeja, who has been nominated for the Arjuna Award, too made his mark with the run-out of Jason Mohammed.

Six of the eight bowlers in the Indian squad rolled their arms over except ace off-spinner Ravichandran Ashwin and pacer Mohammed Shami. Jasprit Bumrah, Navdeep Saini and Jadeja went wicketless in their combined 29 overs but made sure they got enough practice before India begin their World Test Championship campaign from Thursday.

Coming out to bat again, Mayank Agarwal, who opened the innings alongside Ajinkya Rahane, failed yet again, managing only 12 runs before being dismissed by Romario Shepherd, who had him caught behind.

Rahane and Hanuma Vihari batted through the rest of the day and made sure India didn't suffer anymore setbacks. At stumps, India were 84/1 with Rahane and Vihari unbeaten on 20 and 48 respectively.

Kuldeep Yadav West Indies vs India 2019 Cricket
Get the latest Cricket news, check out the India cricket schedule, Cricket live score . Like us on Facebook or follow us on Twitter for more sports updates. You can also download the NDTV Cricket app for Android or iOS.