While Tim David was walking back to the dugout, the camera panned towards the stand where Sara Tendulkar was sitting. Her reaction to David's dismissal has gone viral since then. 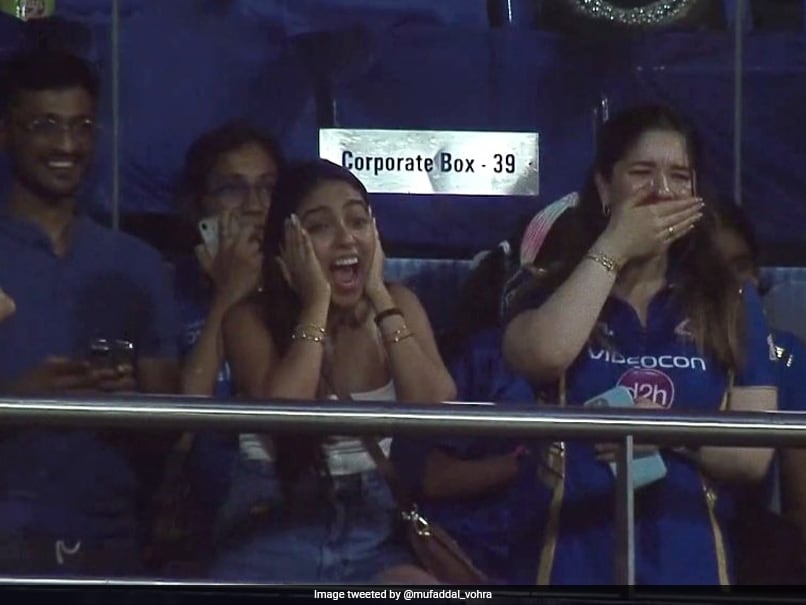 IPL 2022: While David was walking back to the dugout, the camera panned towards Sara.© Twitter

With Mumbai Indians chasing 194, Tim David took the game to the SunRisers Hyderabad bowlers in Match 65 of IPL 2022 at the Wankhede Stadium in Mumbai. With MI reeling at 144 for five in their chase of 194, David slammed a counter-attacking 46 off just 18 balls. He smashed T Natarajan for 26 in the 18th over, bringing the equation down to a gettable 19 off 13. However, David ran himself out while trying to retain the strike as SRH held on for a important win.

David's dismissal was a huge blow for MI, and Sachin Tendulkar's daughter Sara, who was enjoying the game from the stands, was shell-shocked to see the batter depart in such an unfortunate way.

While David was walking back to the dugout, the camera panned towards the stand where Sara was sitting.

Her reaction to David's dismissal has gone viral since then.

What an incredible innings from Tim David , Sara Tendulkar after tim David Got out. pic.twitter.com/CeAHlFAHda

Fans mood when Tim David got out. pic.twitter.com/XgzujAPxUz

The 26-year-old batter has been fine form for MI since returning to the playing XI.

David was earlier dropped from the team after playing just two games, having registered scores of 11 and 2, respectively.

Since making his return to the team, David has scored 139 runs in five games, averaging 50.

David, who played for RCB in the second half of last season, was bought by MI for Rs 8.25 crore at the mega auction.

Wankhede Cricket
Get the latest updates on ICC T20 Worldcup 2022, check out the Schedule and Live Score. Like us on Facebook or follow us on Twitter for more sports updates. You can also download the NDTV Cricket app for Android or iOS.