"If He Can Stay Loyal...": Wasim Jaffer's Hilarious Tweet On Girl's Proposal During RCB vs CSK IPL 2022 Tie Wins Internet

IPL 2022: Wasim Jaffer posted a hilarious tweet after a female spectator proposed to her partner during the RCB-CSK game at MCA Stadium, Pune 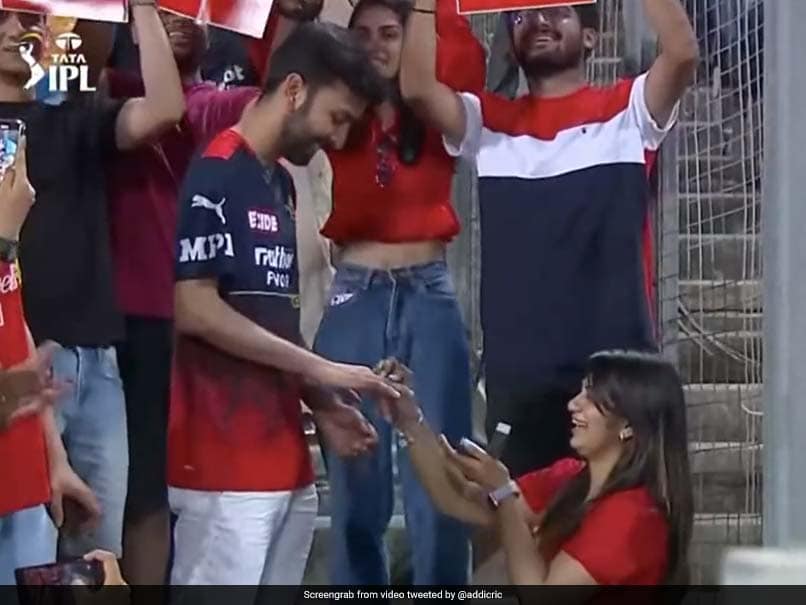 A screenshot from a video shows a female spectator proposing to her partner during RCB-CSK IPL 2022 game.© Twitter

The 49th game of the ongoing Indian Premier League (IPL) 2022 season witnessed some quality cricket action as two of the biggest franchises - Royal Challengers Bangalore and Chennai Super Kings - squared off at the MCA Stadium in Pune. In the end, it was RCB that emerged triumphant by 13 runs to move to the fourth spot in the points table. However, a fan proposing to her partner during the backend of the game grabbed eyeballs and the video has now gone viral.

During the last few overs of CSK's chase, a girl was spotted proposing to her partner in the stands. This incident was also noticed by former India batter Wasim Jaffer and he had a hilarious reaction.

Watch video of the girl proposing to her partner

The guy who was being proposed to was wearing the RCB jersey.

Taking to Twitter, Jaffer wrote: "Smart girl proposing an RCB fan. If he can stay loyal to RCB, he can definitely stay loyal to his partner. Well done and a good day to propose #RCBvCSK #IPL2022."

Smart girl proposing an RCB fan. If he can stay loyal to RCB, he can definitely stay loyal to his partner Well done and a good day to propose #RCBvCSK #IPL2022 pic.twitter.com/e4p4uTUaji

Talking about the game between RCB and CSK, the latter were not able to chase down 174 and, in the end, they stumbled to a 13-run loss.

For CSK, Devon Conway top-scored with 56 but it was not enough to take the MS Dhoni-led side over the line. Harshal Patel was adjudged as Man Of The Match after he returned with figures of 3-35.

With this win, RCB moved to the fourth spot in the points table while CSK are at the ninth position.

Virat Kohli Wasim Jaffer Cricket
Get the latest updates on Fifa Worldcup 2022 and check out  Fifa World Cup Schedule, Stats and Live Cricket Score. Like us on Facebook or follow us on Twitter for more sports updates. You can also download the NDTV Cricket app for Android or iOS.