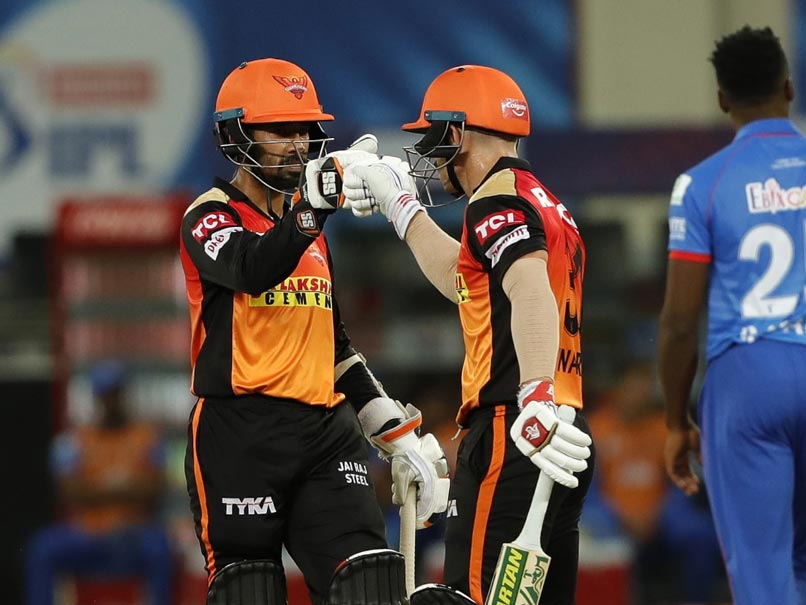 SunRisers Hyderabad (SRH) came out all guns blazing in a must-win game and thrashed Delhi Capitals by 88 runs to keep their playoff hopes alive. Apart from the toss of the coin, it seemed a perfect day for the birthday boy David Warner and he led his side by example, scoring an explosive half-century -- 66 off just 34 balls. Warner opened the innings with a new opening partner Wriddhiman Saha, who relished the opportunity, and matched Warner to-to-toe. He finished as the top-scorer for the SRH, with 87 off just 45 balls. With the ball coming on to the bat nicely, SRH openers made most of the conditions and got their side off to a flying start, collecting 77 runs in the Powerplay, without losing a wicket. Warner, in particular, took on Delhi Capitals' most lethal bowler and 'Purple Cap' holder Kagsio Rabada, collecting 22 runs off his one over and bringing up his half-century off just 25 balls.

Even after the field restriction were lifted, the duo didn't calm down and continued to attack and put on a 107-run stand for the opening wicket. Ravichandran Ashwin deceived Warner with a tossed up delivery to provide Delhi the first breakthrough. After that, Saha and Manish Pandey (44* off 31 balls) didn't let the Delhi bowlers off the hook and scored 70 runs in less than five overs.

Saha, who only plays red-ball cricket for India, was looking all set to score his second IPL century but got out playing an expansive shot off Anrich Nortje.

Delhi bowlers pulled things back towards the end a bit as they gave away just 23 runs in the last three overs to restrict SRH to 219/2.

Rabada had a night to forget as he ended up being the most expensive bowler for his side, leaking 54 runs from his four overs. The South African pacer went wicketless for the first time in 26 IPL games.

Chasing a massive target, Delhi didn't get the start they wanted as their in-form opener Shikhar Dhawan departed without troubling the scorers in the first over.

Marcus Stoinis promoted up the order also departed cheaply, leaving Delhi in a spot of bother. Rishabh Pant, who was dropped from India's limited-overs squad, held crease for a while but failed to make an impact and was eventually dismissed by Sandeep Sharma after scoring 36 off 35 balls.

Tushar Deshpande hit some lusty blows at the end but couldn't avoid his side going down third time in a row. Rashid Khan produced the best figures of the season in terms of economy as he returned with figures of 3/7, which included 17 dot balls. Sandeep Sharma and T Natarajan also bowled brilliantly and returned with two wickets apiece. With this win, SRH moved to sixth spot but they need to win their remaining two games to stand a chance of finishing in the top four.

With this defeat, Delhi Capitals net run-rate took a massive hit and they dropped down to third, with Royal Challengers Bangalore (RCB) taking their place without taking the field. Delhi Capitals still have better chance of making it to the playoffs than SRH but their ride won't be easy as their next two matches are against top two sides Mumbai Indians and RCB.

Sheikh Zayed Stadium, Abu Dhabi IPL 2020 Cricket Sunrisers Hyderabad vs Delhi Capitals, Match 47
Get the latest updates on India vs Australia and check out  Schedule, Results and Live Score. Like us on Facebook or follow us on Twitter for more sports updates. You can also download the NDTV Cricket app for Android or iOS.