Yuzvendra Chahal and Dhanashree Verma got married on December 22 and the cricketer shared a "special" wedding reel with fans on social media. 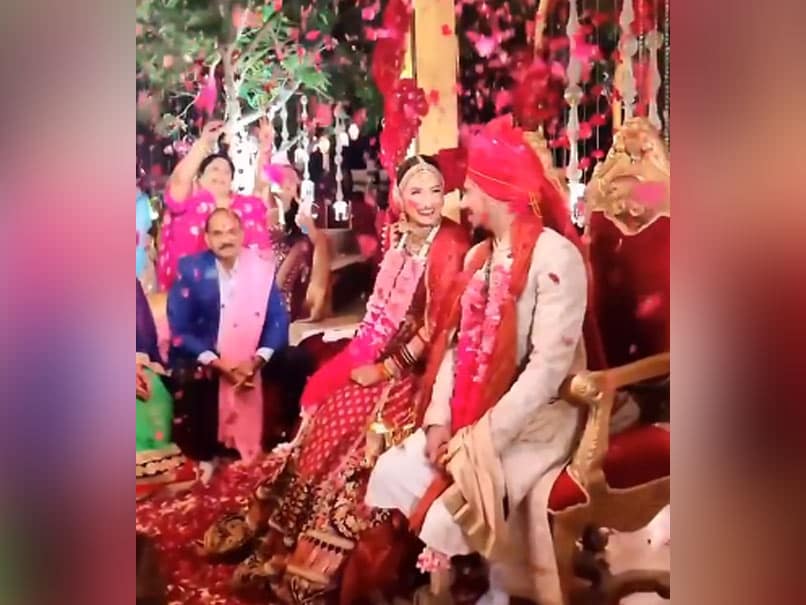 Yuzvendra Chahal with his wife Dhanashree Verma during his wedding ceremony.© Instagram

Yuzvendra Chahal took to social media to thank all his fans and well-wishers for their blessings on his marriage to Dhanashree Verma. The duo tied the knot on December 22 and Chahal took to Instagram to keep fans updated with the wedding rituals. The spinner was recently in Australia as part of India's limited-overs squads. Chahal took to Instagram to post a short wedding video and captioned: "Thank you for all the love and blessings #DhanaSaidYuz Sharing a special reel for you guys @tejas_dodo thank you for capturing this."

The fans responded to his post and also pointed out how cute they looked in the video. One commented: "Both of you looking awesome".

Chahal got engaged to his partner Dhanashree in August this year. She also travelled with Chahal to United Arab Emirates (UAE) where the cricketer played in the Indian Premier League (IPL) 2020 tournament.

Chahal and Dhanashree have been quite active on social media and have shared several posts with their fans.

Chahal was part of India's ODI and T20I teams against Australia. India lost the ODI series but bounced back strongly to win the T20I series.

Chahal also came on as a concussion substitute for Ravindra Jadeja in the first T20I and bowled a good spell, helping India win the match. He was named Man of the Match.

Team India is currently in Australia for a four-match Test series. The visitors lost the first Test match in Adelaide by eight wickets.

The second Test begins from December 26 in Melbourne.

Yuzvendra Chahal IPL 2020 Cricket
Get the latest updates on ICC T20 Worldcup 2022, check out the Schedule and Live Score. Like us on Facebook or follow us on Twitter for more sports updates. You can also download the NDTV Cricket app for Android or iOS.