"For Infinity And Beyond": Yuzvendra Chahal Ties Knot With Dhanashree Verma. See Pics 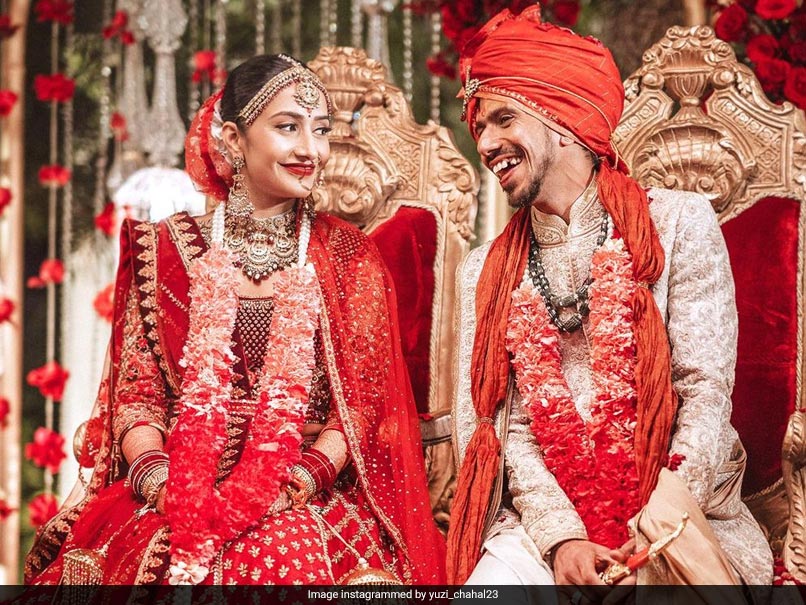 Indian leg-spinner Yuzvendra Chahalgot married to Dhanashree Verma on Tuesday. The Royal Challengers Bangalore (RCB) spinner took to his social media accounts to share the news with his fans. Posting  a couple of pictures with his partner on Instagram, the leg-spinner wrote: "22.12.20. We started at “Once upon a time” and found “Our happily ever after,” coz' finally, #DhanaSaidYuz for infinity & beyond!". In the pictures both Chahal and Dhanashree, dressed in their wedding outfits, can be seen smiling while looking in each other's eyes.

Chahal got engaged to choreographer partner in August this year. In the same month, he left for the UAE for the IPL 2020.

Dhanashree then travelled to the UAEin the middle of the tournament where they both spent some quality time.

Chahal was seen in action during the limited-overs series against Australia. India lost the three-match ODI series 2-1, but came back strongly to clinch the T20I series.

A key member of India's white-ball side, Chahal is yet to make his Test debut and was not included in the squad for ongoing Test series against Australia.

He featured in five matches (2 ODIs and 3 T20Is) against Australia but, barring the 1st T20I, failed to impress. He could only pick five wickets on the tour and was taken to the cleaners in all but one match.

However, before the Australia series, Chahal was in the UAE representing his IPL franchise RCB where he was one of the standout performers and helped them qualify for the playoffs.

He featured in all 15 matches during the season for RCB and finished with 21 wickets to his name, at an impressive economy of 7.08 runs per over.

Yuzvendra Chahal Cricket
Get the latest updates on IPL Auction 2023 and check out  IPL 2023 and Live Cricket Score. Like us on Facebook or follow us on Twitter for more sports updates. You can also download the NDTV Cricket app for Android or iOS.