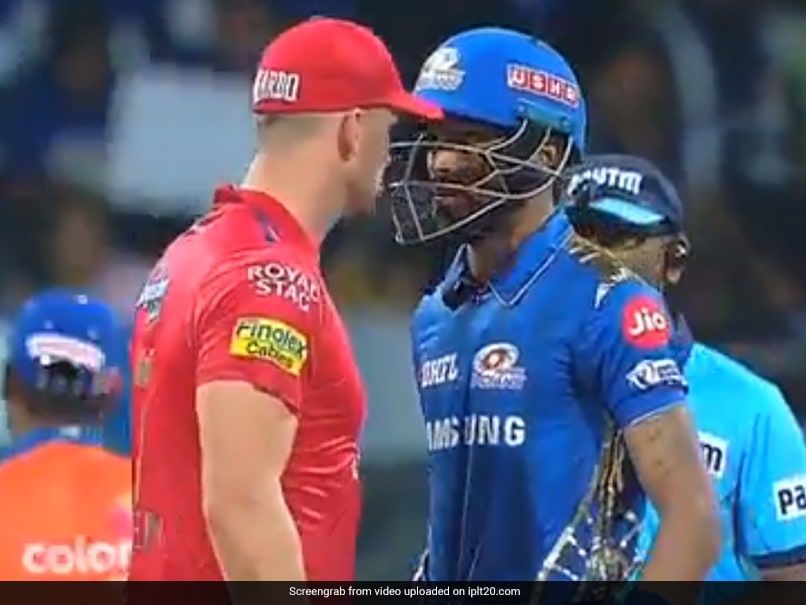 Hardus Viljoen walked straight up to Hardik Pandya and stared him in the eye.© Screengrab: www.iplt20.com

Hardik Pandya and Hardus Viljoen stared each other down during the Indian Premier League game between Mumbai Indians and Kings XI Punjab (KXIP) at the Wankhede Stadium in Mumbai on Thursday. The staring incident took place just after Mumbai Indians lost Ishan Kishan on the last delivery of the 12th over. Needing 198 to win, the hosts were reeling on 94/4 with just 8 more overs to go. The South African walked straight up to Hardik Pandya and stared him in the eye. Hardik Pandya reciprocated the intense eye contact before Hardus Viljoen cleverly backed off with a cheeky smile.

Hardus Viljoen bowled the next over and 15 runs came off it.

Hardik Pandya scored 19 off 13 balls in his short stay before he was removed by Mohammed Shami in the 16th over.

Pollard's blitz helped the hosts chase down their target of 198 on the final ball of the match and overshadow KL Rahul's maiden century in the tournament.

The big-hitting Pollard, who captained the team in place of the injured Rohit Sharma, promoted himself to number four to produce his IPL best.

Needing 15 for victory off the last six balls, Pollard got out on the second delivery as Alzarri Joseph completed the chase with an unbeaten 15.

Pollard lifted his side from 62/3 after nine overs to single-handedly revive Mumbai's hopes. His 54-run seventh wicket stand with Joseph stood out.

Kings XI Punjab Hardik Pandya Hardus Viljoen IPL 2019 Cricket Mumbai Indians vs Kings XI Punjab, Match 24
Get the latest updates on IND vs NZ 2021, check out the Schedule and Live Score . Like us on Facebook or follow us on Twitter for more sports updates. You can also download the NDTV Cricket app for Android or iOS.