Mumbai Indians and Chennai Super Kings (CSK) are facing each other in the final for the fourth time in the history of the IPL. 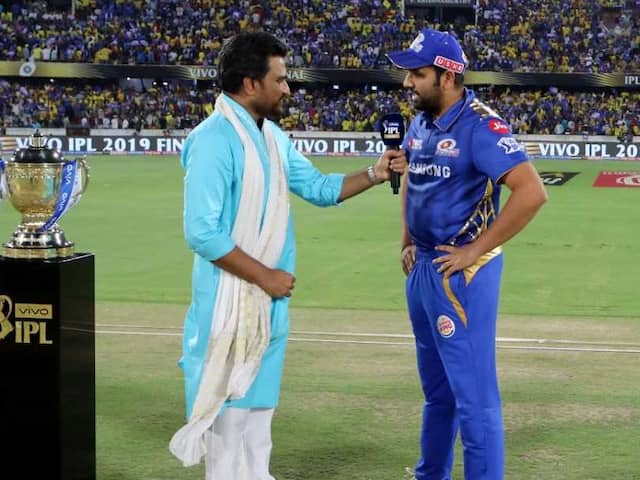 Some fans even alleged Sanjay Manjrekar of biasness towards Mumbai Indians.© BCCI/IPL

Mumbai Indians opted to bat against Chennai Super Kings (CSK) in the high-octane Indian Premier League (IPL) 2019 final in Hyderabad on Sunday. Openers Quinton de Kock and Rohit Sharma gave Mumbai Indians a flying start in the IPL 2019 final and stared dealing in sixes from the beginning. Watching the fireworks by Mumbai Indians openers, even commentator Sanjay Manjrekar couldn't resist admiring the duo but ended up advising Quinton de Kock to be cautious against CSK bowlers in such a crucial match.

Manjrekar's advice for Mumbai Indians from the commentary box didn't get a positive response from the fans, who started trolling the former India batsman on Twitter.

Some fans even alleged Manjrekar of biasness towards Mumbai, a city he belongs to.

"@sanjaymanjrekar saying "Dont do it, Dont do it" to Quinton De Cock! Is he a commentator or @mipaltan coach?," asked a fan on Twitter.

Another one joined in, saying: "Why is a commentator @sanjaymanjrekar so biased in his commentary in favour of Mumbai Indians? He should sit in the stands and cheer his favourite team"

@sanjaymanjrekar saying "Dont do it, Dont do it" to Quinton De Cock!

Why is a commentator @sanjaymanjrekar so biased in his commentary in favour of Mumbai Indians? He should sit in the stands and cheer his favourite team @BCCI @IPL @ChennaiIPL

#CSK and #MI fans, brace yourself!

Both #RohitSharma and #DeKock have got going with a parade of #sixes . #CSKvMI #IPL2019Final promising a 50000 wala cracker of entertainment :)

Pls, @sanjaymanjrekar advice to #MI is not commentary. Don't ruin the telecast for #cricket fans

This @sanjaymanjrekar 's commentary is so irritating.. is there someone neutral and sweet to talk only cricket? #IPL2019Final #CSK

Is @sanjaymanjrekar the most biased commentator ever!!!!

@BCCI can you stop @sanjaymanjrekar from commenting in important matches like IPL Final. Biased and irritating. Mumbai Mumbai and only Mumbai.

Mumbai Indians and CSK are facing each other in the final for the fourth time in the history of the IPL.

In 2010, CSK had defeated Mumbai Indians by 22 runs to clinch their maiden title.

In 2013, Mumbai Indians avenged their defeat and crushed CSK by 23 runs to win their first-ever IPL title. The Rohit Sharma-led added to their trophy cabinet by with an emphatic 41-run win over Dhoni's CSK in the 2015 edition of the IPL final.

Now, both Mumbai Indians and CSK eye an unprecedented fourth crown in the IPL.

Quinton de Kock Sanjay Manjrekar Cricket Mumbai Indians vs Chennai Super Kings, Final
Get the latest Cricket news, check out the India cricket schedule, Cricket live score . Like us on Facebook or follow us on Twitter for more sports updates. You can also download the NDTV Cricket app for Android or iOS.