Chasing 151 for a win, Kings XI Punjab lost dangerous Chris Gayle (16) in the fourth over with their scoreboard reading 18. 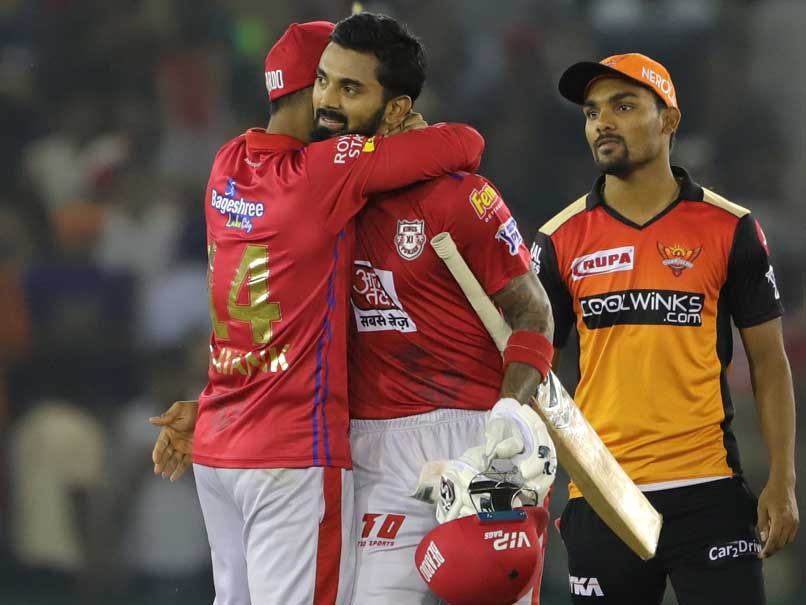 KL Rahul and Mayank Agarwal struck fluent half-centuries to guide Kings XI Punjab to a six-wicket win over SunRisers Hyderabad in a nail-biting Indian Premier League (IPL) 2019 clash at the Punjab Cricket Association IS Bindra Stadium in Mohali on Monday. Opting to bat, Kings XI first restricted Sunrisers to 150 for four and then rode on Rahul and Agarwal's knocks to chased down the target in 19.5 overs. Rahul (71 not out) and Agarwal (55) stitched 114 runs off 84 balls for the second wicket to take Kings XI close to the target.

Chasing 151 for a win, Kings XI lost dangerous Chris Gayle (16) in the fourth over with their scoreboard reading 18. Gayle struck a four and a six each before Deepak Hooda took a brilliant catch at long-on boundary off Rashid Khan's (1/20) bowling to sent packing the West Indian.

Rahul and Agarwal then complemented each other brilliantly as the duo mixed caution with aggression to literally take the game away from SunRisers Hyderabad.

While Rahul was the enforcer, Agarwal matched his Karnataka teammate with his timing and on the rise shots that included a delectable boundary through covers and a lofted six over the long-off boundary.

Rahul reached his half century off 34 balls with a boundary off Mohammad Nabi through the wide long-on region.

Desperate to break the partnership, skipper Bhuvneshwar Kumar brought him back into the attack in the 16th over and nearly achieved his goal, only for Yusuf Pathan to drop a sitter.

A short delivery outside the off stump enticed Agarwal to go for an upper cut, which didn't yield the desired connection and elevation but Pathan dropped a sitter at sweeper cover. But Sandeep Sharma (2/21) picked up two wickets -- Agarwal and David Miller -- in the 18th over to change the complexion of the match.

Agarwal departed soon after reaching his fifty while going for a big shot, caught by Vijay Shankar at deep midwicket off Sandeep Sharma and four balls later Miller to was dismissed by the pacer as the left-hander went for an expansive shot.

It was stroll in the park for Kings XI when Rahul and Agarwal were going great guns but the scenario changed completely, courtesy the two quick wickets.

Kings XI Punjab needed 16 runs off the last two overs and the pressure got the better of new man Mandeep Singh, caught by Hooda off Siddharth Kaul's brilliant penultimate over that yielded just five runs. The pressure shifted to KXIP in no time as they needed 11 runs off the last over off Nabi but Sam Curran (5 not out) and Rahul played sensibly without committing any harakiri to reach home with a ball to spare.

Earlier, David Warner struck his fourth fifty of the season before Hooda played a cameo in the final over to lift Sunrisers to a challenging 150 for four.

Opening the batting, Warner carried on his bat for an uncharacteristic 70 not out off 62 balls to anchor SunRisers' innings but it was Hooda's unbeaten 14 off three deliveries that provided the late thrust to the visitors' innings.

Warner struck six boundaries and one six during his knock, but it was Hooda who stole the limelight, smashing Mohammed Shami for two fours and one hit over the fence to pick up vital 15 runs off the last over.

SunRisers suffered an early blow in the form of Jonny Bairstow (1) after being sent into bat.

Bairstow failed to control a flick off Mujeeb Ur Rahman's (1/34) bowling as Kings XI Punjab skipper Ravichandran Ashwin took a smart catch at short mid-wicket in the second over.

The early dismissal, together with some disciplined bowling from Kings XI, made life difficult for SunRisers batsmen as Warner and new man in Shankar (26) found the going tough.

The duo failed to strike big and stitched 49 runs for the second wicket off 57 balls to stabilise the SunRisers innings.

But just when it was time to cut loose after a slow start, Shankar edged a Ashwin (1/30) delivery to Rahul behind the stumps as Sunrisers slumped to 56 for two after 10.4 overs.

Promoted up the order, Nabi (12) fell victim to an unfortunate run out after adding just 24 runs with Warner.

Warner was not his elements Monday as he struggled to his fifty off 49 balls with the help of four boundaries and one six.

Warner and Manish Pandey (19) then added 55 runs for the fourth wicket to take SunRisers forward before Hooda finished off the innings in style to give SunRisers' bowlers a total to defend.

Sunrisers Hyderabad IPL 2019 Kings XI Punjab vs Sunrisers Hyderabad, Match 22 Cricket
Get the latest updates on ICC T20 Worldcup 2022 and CWG 2022 check out the Schedule, Live Score and Medals Tally. Like us on Facebook or follow us on Twitter for more sports updates. You can also download the NDTV Cricket app for Android or iOS.