MS Dhoni was caught up in a rare incident in the IPL 2019 match between CSK and KXIP on Saturday. 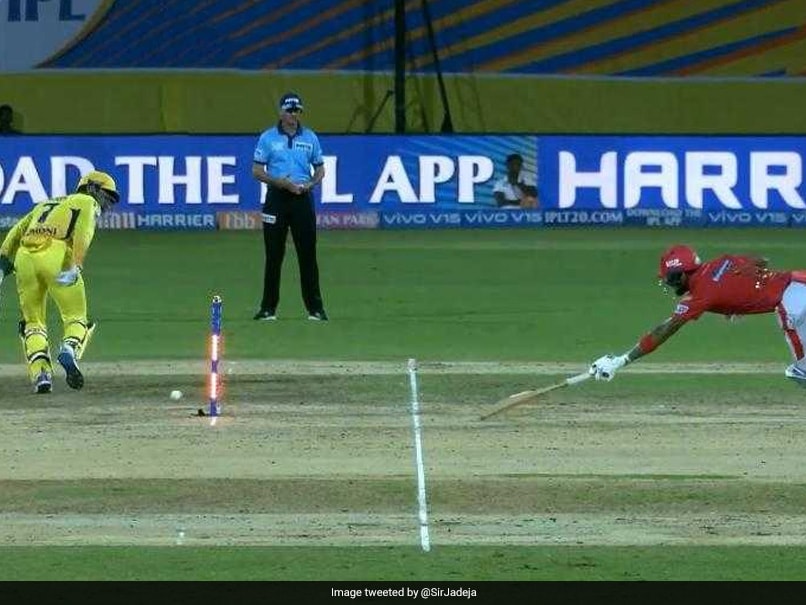 MS Dhoni getting unlucky with his wicket-keeping gloves on is a rare sight.© Twitter

MS Dhoni getting unlucky with his wicket-keeping gloves on is a rare sight to watch as he has pulled off incredible stumpings, catches and run-outs time and again for India and Chennai Super Kings (CSK). However on Saturday, when the defending IPL champions hosted Kings XI Punjab (KXIP) in an Indian Premier League (IPL) 2019 tie, Dhoni got unlucky with his no-look throw when he tried to run out opener KL Rahul in the 13th over. Despite getting a direct hit, KL Rahul survived as the bails did not fall. The incident left Ravindra Jadeja, who was bowling the 13th over, amused. But the ever calm Dhoni reacted to the bizarre moment with a grin on his face.

Following the scare, Rahul went on to register his 12th IPL fifty but failed to help his side get over the line as his KXIP lost by 22 runs, owing to a poor batting performance.

Along side Rahul, only the uncapped Sarfaraz Khan played a fighting knock as KXIP could manage only 138/5 in their chase of 161 runs.

After the match, Dhoni was seen having some fun as he enjoyed a sprint race with his teammate Shane Watson and Imran Tahir's sons.

CSK currently top the IPL 2019 points table with eight points behind them are tournament favourites SunRisers Hyderabad who have six points.