Rohit Sharma had a freewheeling chat with spin twins Yuzvendra Chahal and Kuldeep Yadav ahead of the India vs West Indies 3rd T20I. 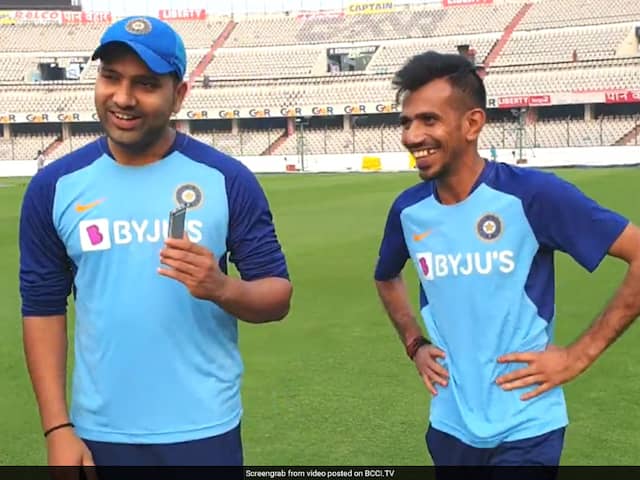 Rohit Sharma interviewed Yuzvendra Chahal and Kuldeep Yadav ahead of the third T20I in Mumbai.© BCCI/Twitter

Rohit Sharma seems to share a strong bond with spinner Yuzvendra Chahal. The two cricketers have been seen teasing and tagging each other as GOAT (greatest of all time) time and again on the social media. The duo, who are currently engaged in India's three-match T20I series with the West Indies, amused their fans again on social media, this time in a video tweeted by the Board of Control for Cricket in India (BCCI) on Tuesday. "Rapidfire ft. Kuldeep, Chahal and the HITMAN. Many fun facts from the spin twins @yuzi_chahal & @imkuldeep18 on the questions curated by @ImRo45," the BCCI captioned the video, featuring Rohit Sharma, Yuzvendra Chahal and Kuldeep Yadav in an informal chat.

MUST WATCH: Rapidfire ft. Kuldeep, Chahal and the HITMAN

Among many entertaining and quick answers, the reply that delighted Rohit the most was the one in which Chahal complimented his batting.

Rohit asked, "One batsman you wouldn't want to bowl to?"

"You (Rohit Sharma) in the IPL. Everyone says that when you are on 20-25 runs, already settled, it becomes difficult to bowl as you play shots all across the park," Chahal replied.

Beaming with joy, Rohit promised Chahal a "dinner" treat on camera, saying: "I have to take him for dinner tonight."

In the two minutes and 44 seconds long video, Rohit asked Chahal and Kuldeep about the "best thing about Hyderabad".

While Chahal replied "veg biryani", Kuldeep recalled his T20 debut for KKR at the Rajiv Gandhi International Stadium in Hyderabad and called the stadium the best thing.

When Rohit asked who is the worst dancer in Team India, both the spinners took the name of all-rounder Shivam Dube.

India won the first T20I in Hyderabad by six wickets but lost the subsequent match by eight wickets in Thiruvananthapuram. The third and final match of the T20I series will be played in Mumbai on Wednesday.

Kuldeep Yadav India vs West Indies 2019/20 Cricket
Get the latest Cricket news, check out the India cricket schedule, Cricket live score . Like us on Facebook or follow us on Twitter for more sports updates. You can also download the NDTV Cricket app for Android or iOS.