Rohit Sharma amused his fans on Instagram with a hilarious comment on India teammate Kedar Jadhav's post, in which he had shared a few pictures of himself in ethnic attire. "Be fearlessly authentic. Have a happy Monday!" batting all-rounder Kedar Jadhav captioned the pictures on Instagram. While many fans liked Kedar Jadhav's "authentic" look and flooded his post with pleasing messages, vice-captain Rohit Sharma took the cake with his comment, saying: "Zeher bhai zeher". Both Rohit Sharma and Kedar Jadhav are part of India squad that is currently facing the West Indies in the three-match T20 International series.

Be fearlessly authentic Have a happy Monday! 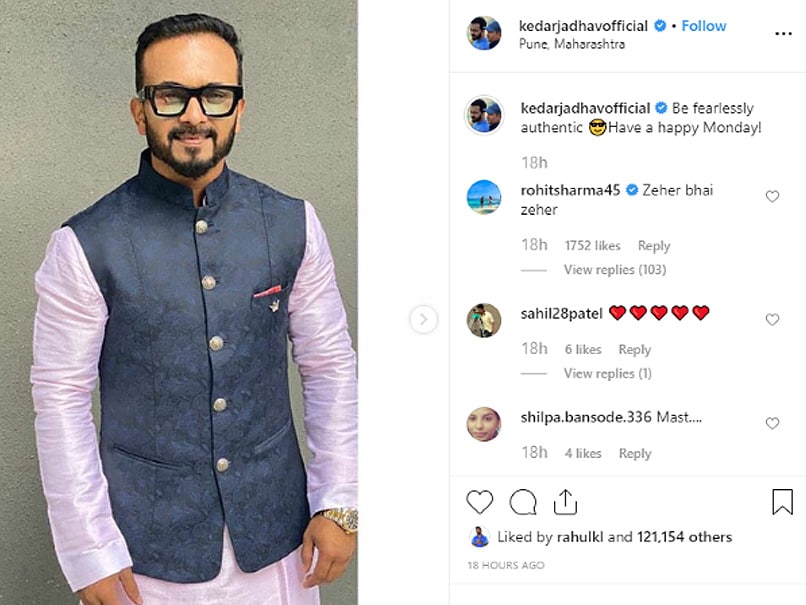 The ongoing three-match T20I series is currently level at 1-1 and the third and final match will be played in Mumbai on Wednesday.

India won the first T20I by six wickets in Hyderabad on Friday but then the West Indies levelled the series with an eight-wicket win in the subsequent match in Thiruvananthapuram on Sunday.

Rohit managed scores of 15 and eight in the two T20Is against the West Indies and will aim for an improved showing in the third T20I at his home ground.

Rohit is just one six away from reaching the milestone of 400 international sixes across all formats of the game.

If Rohit hits a six during the 3rd T20I, he will become the first Indian to enter the 400 sixes club.

Gayle, with 534 sixes, holds the record of hitting the maximum number of sixes while Afridi, with 476 sixes, is second on the list.