Sourav Ganguly believes that Ravindra Jadeja's improved batting will be very important for the Indian team going into the future. 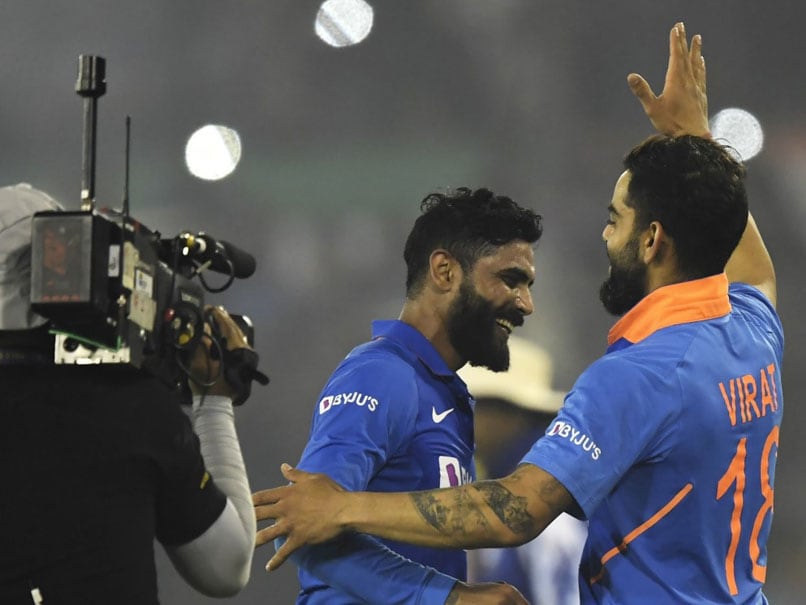 Ravindra Jadeja remained unbeaten on 39 off 31 balls in a high-scoring chase in Cuttack.© AFP

BCCI president Sourav Ganguly says Ravindra Jadeja's improved batting will be very important for the Indian team going into the future after the all-rounder played a crucial cameo in the third ODI against the West Indies in Cuttack. Jadeja, who has already hit 11 half-centuries in ODIs, held his nerves to remain unbeaten on 39 off 31 balls in a high-scoring chase against West Indies in the series decider on Sunday night. "Another win @bcci...congratulations..good performances with the bat in a pressure game... Jadeja s improvement with the bat so important ..." Ganguly tweeted.

Another win @bcci ...congratulations..good performances with the bat in a pressure game..jadeja s improvement with the bat so important ...

Ganguly's satisfaction is understandable as Jadeja, at the start of his career, was panned for not being able to hit big shots in the death overs.

However, things have changed in the past few years and he has now scored more than 2000 runs in ODIs (2188 to be precise) and 1844 in Test matches.

"It was a very crucial innings as it came in a series-decider. The wicket was so good to bat on, we could just played with singles. We just needed to play according to the merit of the ball.

"I didn't play too much ODI cricket (this year). I tried and gave my best be it in bowling, batting or fielding whenever I got an opportunity," Jadeja, who played 15 of India's 28 ODI matches this year, said after their win at Barabati Stadium on Sunday.

In all, he has 25 half-centuries (14 in Tests and 11 in ODIs) along with a hundred in the longest format.

Ravindra Jadeja Sourav Ganguly Cricket India vs West Indies, 3rd ODI India vs West Indies 2019/20
Get the latest updates on India vs South Africa and check out  Schedule, Results and Live Score. Like us on Facebook or follow us on Twitter for more sports updates. You can also download the NDTV Cricket app for Android or iOS.