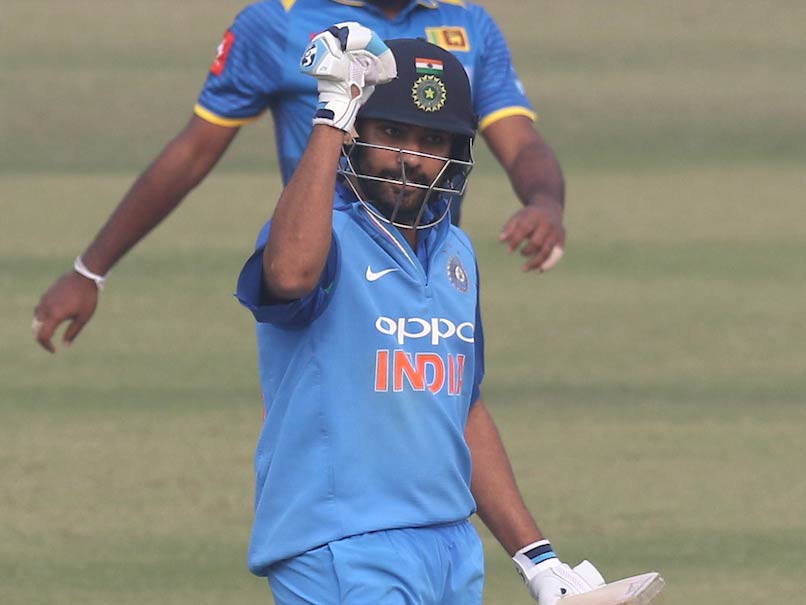 Rohit Sharma's blistering double century powered India to a huge 141-run victory against Sri Lanka in the second One-Day International in Mohali on Wednesday. With this win, the series is now locked at 1-1. Rohit smashed an unbeaten 208 off 153 balls to fire India to a mammoth 392 for four, a total that proved to be too much for Sri Lanka as the visitors ended way behind at 251 for 8 with Angelo Mathews' unbeaten 111 going in-vain.

WhileRohit stole the showwith another sensational knock, Shikhar Dhawan (68 off 67) and rookie Shreyas Iyer (88 off 70) played the supporting role to perfection.

India virtually batted Sri Lanka out of the game by posting the highest-total at this ground, surpassing the 351 for five South Africa made against Netherlands in 2011.

It was not the only record that was shattered on a day when India were under pressure to perform after the debacle in Dharamsala.

Rohit, captaining the side in his first full series, single-handedly won the game for India with an innings that comprised as many as a dozen sixes and 13 fours.

After completing his first 100 runs off 115 balls, the stylish opener was simply unstoppable, blasting the next 100 runs off 36 balls to complete a famous double ton in the 50th over of the innings.

His last double hundred, 264 at the Eden Gardens three years ago, had also come against Sri Lanka while the maiden one (209) was recorded against Australia at Bengaluru in 2013.

Sachin Tendulkar, Virender Sehwag, Chris Gayle and Martin Guptill are the others who have breached the 200-run mark in 50-over cricket.

However, the Rohit special came on a batting beauty, two days after Indian batsmen failed miserably against the moving ball in Dharamsala.

Sri Lanka pacers were on the money in the series opener but they put up a performance they would like to forget sooner than later.

They offered too many freebies including lead pacer Suranga Lakmal who had an off day leaking 71 runs in eight overs.

The other pacers, captain Thisara Perera (3/80) and Nuwan Pradeep (0/106), too were guilty of bowling too many low full tosses and half trackers, making the job easier for Rohit and Co.

Though Rohit ran amok in the death overs, he took time early on. It was Dhawan who attacked the opposition bowlers initially before the dangerous opening duo completed their 12th century stand to lay the foundation for a big total.

En route to his double hundred, Rohit crossed the 100-run mark in ODIs for the 16th time in his career, sixth this year and first ever as captain.

Another record shattered was of the highest individual score here with Rohit surpassing the 154 by Virat Kohli made against New Zealand last year.

After Dhawan departed, Iyer batted well alongside Rohit and came up with the big shots just when his team needed to step on the accelerator.

It was cold and overcast over the past two days but the sun came out just before the start of the game, sucking the moisture out of the pitch to make batting easier.

Sri Lanka had no hesitation in bowling first, just like they did in Dharamsala, but the conditions changed quickly to the favour of the hosts.

Unlike the first ODI, there was not enough swing early on to trouble the Indian batsmen, who exploited the conditions to good effect.

Rohit and Dhawan got the measure of the pitch in the first Powerplay, where they made just 33, and started playing their strokes thereafter to take India to 108 for no loss in 20 overs. Rohit and Iyer then got together to hammer the Sri Lankan bowlers all around the park. Lakmal tormented the Indian batsmen two days ago but today he bowled too full or too short.

Most of his low full-tosses were sent sailing over midwicket by Rohit, who batted like a six hitting machine in the last 10 overs.

One such instance was the 43rd over when Rohit smashed Lakmal for four sixes off four legal balls in an over that went for 26 runs.

It was raining runs in the last 10 overs where India added as many as 147 for the loss of three wickets. In response to India's huge total, Sri Lanka were never in the game despite a fighting effort from Mathews.

India bowled well with the cushion of mountain of runs.

It was a memorable day for 18-year-old Washington Sundar, who picked the wicket of Lahiru Thirimanne on his India debut. The Sri Lanka innings also saw a security breach when a 21-year-old from Surat trespassed on to the field and touched MS Dhoni's feet. He was later detained by the police.