KL Rahul hit a classy half-century as India continued their domination over Sri Lanka to register a massive 93-run win, their biggest victory in T20 Internationals on Wednesday. 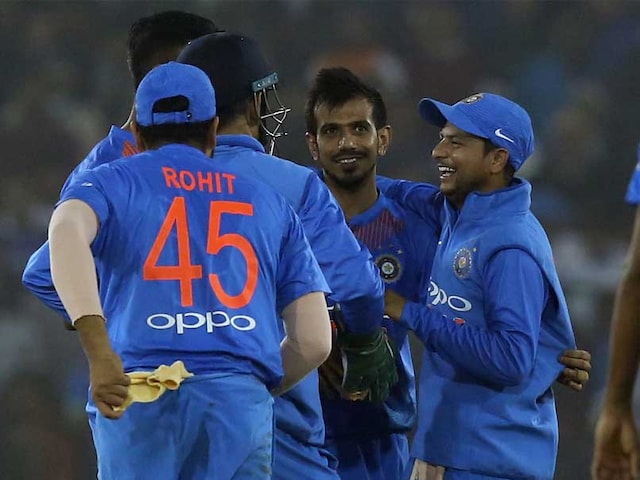 India produced a brilliant all-round performance to beat Sri Lanka by 93 runs in the first of the three match T20I series played at the Barabati stadium, Cuttack on Wednesday. Yuzvendra Chahal was the pick of the bowlers for India as he returned with figures of 4 for 23 that helped India bowl out Sri Lanka for 87. After posting a challenging 180 for 3, India picked up wickets at regular intervals that restricted the flow of runs as Sri Lanka never really found any momentum in their run chase. Hardik Pandya took three wickets and Kuldeep Yadav finished with 2 for 18 in his 4 overs.

Earlier, Sri Lanka captain Thisara Perera won the toss and elected to bowl first. India's stand-in captain Rohit Sharma looked in great touch as he started off in fine fashion. Rohit soon got to 1500 T20I runs and became only the second Indian to achieve that feat after Virat Kohli but was soon dismissed for 17 as Angelo Mathews struck for the visitors. KL Rahul (61) took the attack to the opposition as he kept the scoreboard moving while Shreyas Iyer (24) gave him good company at the other end. Nuwan Pradeep gave Sri Lanka the breakthrough by getting rid of Iyer which did little to choke the flow of runs. Rahul continued in his usual fashion and along with MS Dhoni took India to a position of real dominance in the match.

Perera struck with a brilliant slower delivery as Rahul went for the big shot only to find his stumps all over the place. That got Manish Pandey to the crease and a late onslaught by both Dhoni (39*) and Pandey (32*) took India to 180 for 3 at the end of 20 overs.

India struck early with the ball as Niroshan Dickwella (13) was dismissed in the second over of the innings and from there on there was no looking back for the Indians. Upul Tharanga (23) top scored for Sri Lanka as the rest of the batting fell apart with Angelo Mathews (1), Asela Gunaratne (4), Dasun Shanaka (1) and Thisara Perera (3) all falling in quick succession.

Sri Lanka were bundled out in 16 overs that helped India win the match by a massive 93-run margin, their biggest victory in T20 Internationals.