Yuvraj Singh and MS Dhoni scored 150 and 134, respectively, as India pipped England by 15 runs in the 2nd ODI in Cuttack on Thursday 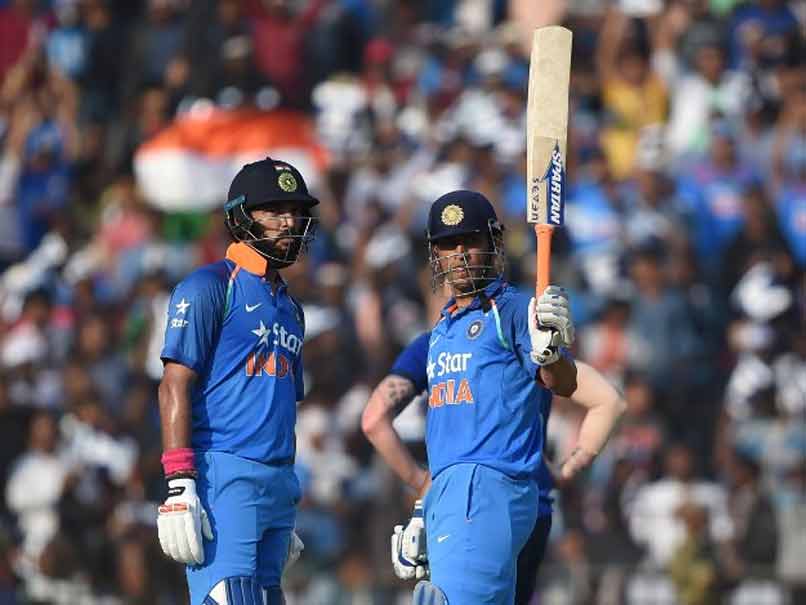 After a thrilling 15-run win over England in the second One-Day International in Cuttack on Thursday, Team India captain Virat Kohli lauded Yuvraj Singh and MS Dhoni for their prolific tons during India's innings. Yuvraj and Dhoni scored 150 and 134, respectively, as the hosts pipped England in a nail-biting finish. R Ashwin picked three wickets as skipper Eoin Morgan's century went in vain, with the visitors finishing their innings at 366/8. Both Yuvraj and Dhoni showed great composure earlier in the day, as they set up a 256-run stand for the fourth wicket, helping India recover from a score of 25/3 and end with a total of 381/6.

"We were wondering if we had a good start were we would have ended up...it wasn't good batting early on. Two of the greats stood up, that is what the team management envisioned (the prospect of both Yuvraj and Dhoni in the playing eleven)," said Kohli after the win handed India an unassailable 2-0 lead in the three-match series.

"Getting 381 from 25 for 3 was outstanding. We knew we'd get wickets at some stage or the other but we bowled at the more difficult part of the day. The guys showed really good character. We pulled it back nicely in the end.

"Having won the series, just before the Champions Trophy, the key will be for us to express ourselves and work out what is the best opening partnership. Two guys who had a really good Test series (Ravindra Jadeja and R Ashwin) stepped up and had we not picked up those wickets I don't know where the game would have gone. I'd say we are only at 75 percent of our potential. We hope to play to our full potential in Kolkata," added the skipper.

Yuvraj, who hammered 150 off 127 balls, said performance in the domestic season lifted his confidence.

"In the domestic season I've been hitting the ball well. Me and MS understood the situation, we had to start again. I was trying to hit the ball down the ground and once we got going I thought we started to attack at the right time," said Yuvraj.

"We just wanted to get one partnership going then we were able to play a lot of shots. We were thinking 340-350. It's probably by best innings. I started as a lower-order batsman, the higher you bat the more balls you get to play -150 was a target for me. I wanted to prove a point to myself. I knew it was coming. Diet has been the key, when you pass 30 you have to work harder at your fitness," he added.

England captain Eoin Morgan was disappointed to go down after a valiant fight. The southpaw took his team near the finishing line with a 102 off 81 balls before getting run while backing up at the non striker's end.

"We weren't at our best again. It's very disappointing to get so close and not over the line. Bowling to MS Dhoni and Yuvraj can be difficult. Your margin for error is quite small, you have to try and break the partnership. We showed a lot of fight. We believed we could chase it down. There's a tremendous amount of belief but we didn't quite have the skill today," said Morgan.

Comments
Topics mentioned in this article
Cricket India Cricket Team England Cricket Team India vs England 2016-17 Virat Kohli MS Dhoni Yuvraj Singh
Get the latest updates on Fifa Worldcup 2022 and check out  Fifa World Cup Schedule, Stats and Live Cricket Score. Like us on Facebook or follow us on Twitter for more sports updates. You can also download the NDTV Cricket app for Android or iOS.