Yuvraj Singh earned a call-up to the Indian squad after a gap of three years. Moeen Ali has been one of the consistent performers both with the bat and ball for England in Tests. 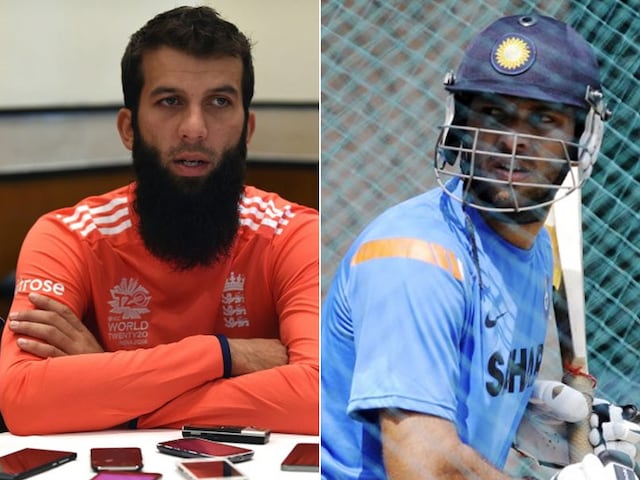 Yuvraj Singh will go head to head against Moeen Ali in the upcoming ODI series.© AFP

Yuvraj Singh, the comeback man of Indian cricket, is back in the reckoning in ODIs for India. His power-hitting is something India has missed, especially at the back end of the innings. Moeen Ali has made big contributions for England cricket over the past year in Tests. However, his record in ODIs and T20Is is nothing to write home about and may well be tested by Yuvraj. Yuvraj Singh, on the other hand, is a giant of the limited-overs format. He played a starring role in India's triumph at the 2007 World T20 and was also named player-of-the-tournament in the ODI World Cup victory at home soil in 2011.

Here is a look at how the two cricketers match-up, keeping their recent performances in mind.

However, his career was derailed when it was revealed he had a golf ball-sized non-malignant tumour in his lung, which was later re-diagnosed as a cancerous condition called "mediastinal seminoma".

Yuvraj last played an ODI for India on December 11, 2013, against South Africa at Centurion while his last T20I appearance was on March 27, 2016, against Australia at Mohali in the World T20.

The stylish left-hander has played 15 T20Is in the past year, scoring 166 runs at an average of 20.75 with a high score of 35. He has also chipped in with five wickets in this period.

However, the real sign of improvement has been his performance in the this season's Ranji Trophy where he has smashed 672 runs in five matches (eight innings) with a high score of 260. He averaged a whopping 84 and recorded two centuries and two half-centuries.

Moeen Ali, meanwhile, was the second highest wicket-taker and second highest run-getter for England in the Test series against India and would look to carry forward that form into the limited overs series.

He hasn't fared too better in the T20Is either. Moeen has has scored just 70 runs in nine matches with a score of 41 not out at an average of 17.50. He has seven scalps to his name.

Comments
Topics mentioned in this article
England Cricket Team India Cricket Team Yuvraj Singh Moeen Munir Ali India vs England 2016-17 Cricket
Get the latest Cricket news, check out the India cricket schedule, Cricket live score . Like us on Facebook or follow us on Twitter for more sports updates. You can also download the NDTV Cricket app for Android or iOS.