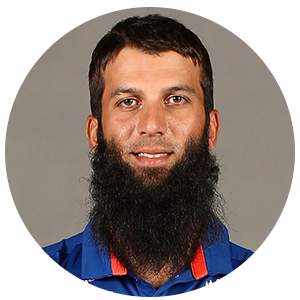 Born in 1987 in the city of Birmingham, Moeen Ali is fondly known as 'the beard that's feared' in his hometown. He was a teenage prodigy and destined for success due to his extraordinary skill-set. Moeen was signed by Warwickshire as a 15-year-old and he didn't waste time in impressing one and all.

CSK vs RCB: Chennai Super Kings Players To Watch Out For

KKR vs CSK: Chennai Super Kings Players To Watch Out For

Born in 1987 in the city of Birmingham, Moeen Ali is fondly known as 'the beard that's feared' in his hometown. He was a teenage prodigy and destined for success due to his extraordinary skill-set. Moeen was signed by Warwickshire as a 15-year-old and he didn't waste time in impressing one and all.

Ali also captained England in the 2006 Under-19 World Cup and took his team till the semi-final. Due to limited opportunities at Warwickshire, Moeen switched to the rival county team, Worcestershire. He played a vital role in his side winning the Pro-40 title in 2007 and one of his knocks, a blazing 46-ball century, was much-talked about. After working hard in the domestic circuit and showing his all-round abilities, the national selectors finally picked him for the ODI series against West Indies and the World T20 that followed.

It didn't take long for Moeen to break into the English Test team and that was also helped by the untimely retirement of Graeme Swann. His elegance with the bat and ability to bowl useful off-breaks played a big role in his selection. Ali made his Test debut against Sri Lanka at Lord's and in his very second Test, he almost saved the match for his team with a valiant century.

Considered as a part-time spinner, Moeen's career graph in Tests jumped to another level when he picked 19 wickets against the touring Indian team and surprised many. Always open to learning, it was later known that Ali benefited from the technical advice from Kumar Dharmasena, who was an umpire in the series. Post that, his Test career went from strength to strength and he established himself as a key member of the England unit. His career in the limited-overs cricket also went well side by side where he usually batted in the top order. However, things changed after the 2015 World Cup debacle and the selectors left him out of the ODI team so he could work on his red ball bowling.

The emergence of Alex Hales and Jason Roy at the top of the order increasingly made it tough for Moeen to get his place back but he never lost hope. Soon, he was picked by the selectors with a new role to bat in the lower order and his useful bowling worked as a plus point. In the year 2017, against the visiting South African team, Moeen Ali created a record by becoming the first player in Test history to take 25 wickets and score 250-plus runs in a 4-match Test series.

Coming to his domestic exploits, particularly in the Indian T20 League, he was picked up by Bangalore for the 2018 season but was not given a chance straightaway as Bangalore had some good all-rounders in their ranks but he was given a chance in the 4th game of the season, and he accepted this chance gleefully as he went onto score a match-winning knock of 64. His consistent show, whenever given a chance, prompted Bangalore to retain him for the 2019 season, where he was once again good and struck 2 fifties for his side. He was not used much in the 2020 season and RCB let go of him for the 2021 auction, where Chennai picked him up for a whopping INR 7 crore.


His form away from home has always raised a question but decent performances in his limited games against India in early 2021 in the Test format, has shown that he still has a lot to offer to the English side, be it any format, and he is here to stay for some more time.