Prithvi Shaw shared a pic with his "travel buddy" and it drew an amusing comment from his India and Delhi Capitals teammate Shikhar Dhawan. 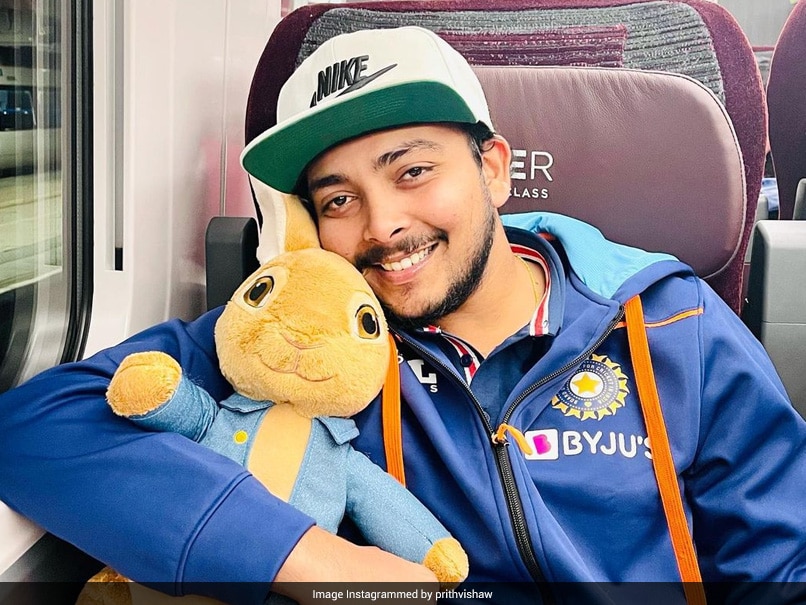 Prithvi Shaw shared a picture with his "travel buddy" ahead of fourth Test match vs England.© Instagram

India's top-order batsman Prithvi Shaw is currently in England for the ongoing five-match Test series against the hosts. Prithvi was not initially included in India's squad for the England tour. He was added later after Shubman Gill and Washington Sundar were ruled out of the series at different stages. Shaw is yet to feature in the series and the right-handed batsman has been keeping his fans entertained by sharing snaps on his Instagram page from his travel days and net sessions in England. On Wednesday, the cricketer gave his fans a peek into his personal life by sharing a bunch of photographs on Instagram with his "travel buddy".

Prithvi's post soon became the talk of the town as his India and Delhi Capitals (DC) teammate Shikhar Dhawan was among the first few to respond to the post.

Pulling Prithvi's leg for travelling with his "buddy", the opener wrote, "Nibbler bhi bhej doon? (Shall I send nibbler too?)"

"Love both. The travel buddy more as he is as cute as his friend," a fan wrote on the post.

"Hello honey bunny," wrote another fan on the post.

One fan even jokingly told Prithvi that the cricketer was getting affected by the bio-bubble. "Bio bubble is getting to you," the user wrote.

Another cricket fan asked Prithvi if he is promoting the 'Teddy' movie by sharing these photographs. "Teddy movie Hindi release promotion?" wrote the fan.

Meanwhile, the five-match Test series between India and England is currently level at 1-1 after three Tests.

India and England will once again square off against each other from Thursday in the fourth Test at Kennington Oval, London.

Shikhar Dhawan England vs India, 2021 Cricket
Get the latest updates on ICC Women's Cricket World Cup 2022 and IPL 2022, check out the Schedule , Live Score and IPL Points Table. Like us on Facebook or follow us on Twitter for more sports updates. You can also download the NDTV Cricket app for Android or iOS.