The four-match Test series between India and Australia is currently level at 1-1. 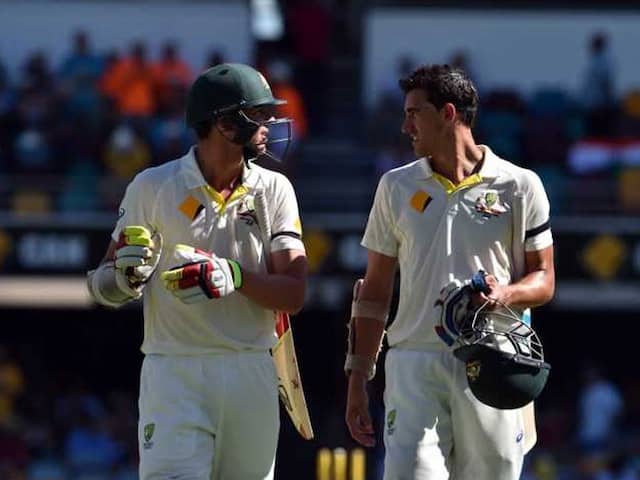 Mitchell Starc and Josh Hazlewood stitched a crucial partnership in the second innings of the Perth Test.© File Photo/AFP

Contrary to the performance of the Indian lower order with the bat, Australian tailenders Mitchell Starc and Josh Hazlewood batted with grit and resilience on Day 4 of the second Test in Perth as they added crucial 36 runs for the last wicket in the second innings. The runs proved vital as India ended up losing the match by 146 runs. Speaking on the contribution from the tailenders in the second Test, Mitchell Starc on Thursday claimed that the team's lower order takes "a lot of pride in" with contributions with the bat.

"It's something that we all work really hard at and we have done for a long time. Those partnerships make India bowl a lot more overs and then the other three of us we just try and hang around a bit and score a few runs and face a few balls.

"It's something our tail takes a lot of pride in. And then with the ball we're trying to do the exact opposite for them and try to get them out really quickly," Starc was quoted as saying by icc-cricket.com.

Australia went into second match with the combination of three pacers and a spinner. Off-spinner Nathan Lyon bowled brilliant spells in both the innings claiming eight wickets in the match.

Speaking on the bowling combination of the team Starc said that the current formula has worked well for the team and Lyon's contribution has made the job of the pacers a lot easier.

"Whether we go with five bowlers or four ... you've got Nathan Lyon there doing as well as he has done for a long time. It makes our job a lot easier because he'll bowl a lot of overs and he'll either not go for runs or he'll keep taking wickets so for the other three of us to come on at the other end - if it's just four of us - it's something we've done for a while now.

"We've done it for NSW (New South Wales), done it over the years as a group of four. We're probably a few of the more experienced guys in the group now. We've learnt along the way and it's fantastic the last two weeks how we've gelled together again as a group of four," Starc added.

The four-match Test series between India and Australia is currently levelled at 1-1. The third Test will commence from December 26 in Melbourne.

Nathan Lyon Australia vs India 2018/19 Cricket Australia vs India, 2nd Test
Get the latest Cricket news, check out the India cricket schedule, Cricket live score . Like us on Facebook or follow us on Twitter for more sports updates. You can also download the NDTV Cricket app for Android or iOS.