The International Cricket Council's (ICC) official Twitter handle took a cheeky dig at England fans as Australia were on their way to retain the Ashes. 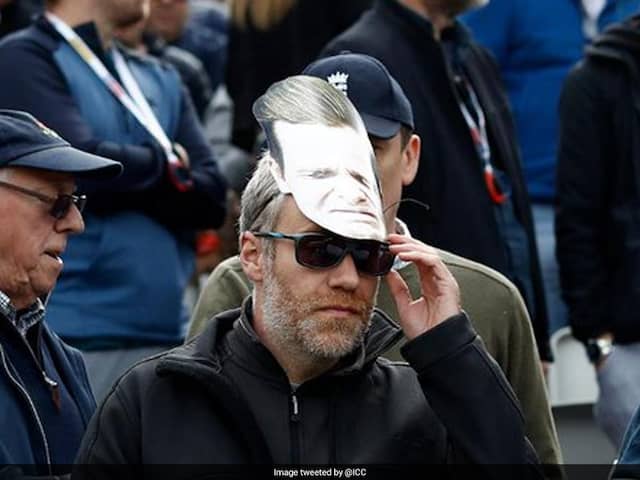 Steve Smith starred with the bat as Australia thrashed England by 185 runs in the fourth Test to retain the Ashes. It has been a magical return to the Test arena for the former Australia captain since completing a 12-month ball-tampering ban. Smith and David Warner have had to contend with a hostile, boisterous English crowd who have taunted and mocked the Australian duo at every given opportunity but the Australians had the last laugh, restoring their national pride 18 months on from the reputation-shattering scandal. Former players and fans hailed Steve Smith, labelling him the "best". The International Cricket Council (ICC) too tipped their hats to the Australian by taking a cheeky dig at the English fans.

Before the start of Day 5 of the fourth Test, ICC's official handle tweeted a picture of an English spectator wearing a Steve Smith mask with a crying face on it and used the definition of "karma" as text for their tweet.

karma [noun]
karma | \ kr-m also kr-\
Definition of karma
often capitalized : the force generated by a person's actions held in Hinduism and Buddhism to perpetuate transmigration and in its ethical consequences to determine the nature of the person's next existence. pic.twitter.com/tv2UmTd1TI

The tweet quickly went viral, leaving a horde of users shell-shocked. While many praised the handle's trolling skills, others asked if ICC's account had been hacked.

What a trolling to eng fans

We seriously need to know who runs this account. It's getting out of hand now.

England, set a huge second-innings target of 383 to win, were bowled out for 197, putting Australia 2-1 up in the five-Test series ahead of next week's finale at the Oval.

The result means current holders Australia retain the Ashes regardless of the result in the final match of the series.

Steve Smith scored 211 and 82 in the fourth Test to take his tally for the series to an astonishing 671 runs at an average innings of 134.2, including three hundreds, despite missing England's one-wicket win in the third Test at Headingley with concussion.

Steven Smith The Ashes 2019 England vs Australia, 4th Test Cricket
Get the latest Cricket news, check out the India cricket schedule, Cricket live score . Like us on Facebook or follow us on Twitter for more sports updates. You can also download the NDTV Cricket app for Android or iOS.