Victory ensured Australia kept hold of the Ashes at 2-1 up with one to play in the five-Test campaign. 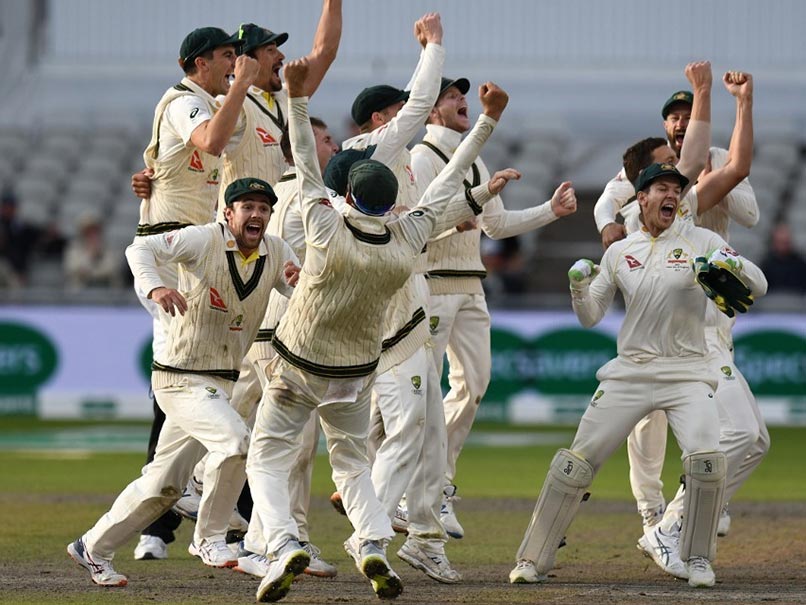 Australia retained the Ashes with a 185-run win over England.© AFP

Pat Cummins led the way before Josh Hazlewood struck as Australia retained the Ashes with a 185-run win over England in the fourth Test at Old Trafford on Sunday. England, set a huge target of 383 to win, were bowled out for 197 following some spirited lower-order defiance. Cummins, the world's top-ranked Test bowler, took 4/43 in 24 overs.

The match ended when Craig Overton, who faced 105 balls, was lbw to Hazlewood for 21 after the tailender's review failed to overturn umpire Kumar Dharmasena's decision.

Victory ensured Australia kept hold of the Ashes at 2-1 up with one to play in the five-Test campaign.

If Australia avoid defeat at the Oval next week they will have won their first Test series in England for 18 years.

Jos Buttler, England's last recognised batsman, faced 111 balls either side of tea making 34 when crease occupation was the order of the day.

But his patient vigil ended with a misjudgement that saw Buttler bowled playing no shot to a Hazlewood ball that cut back to hit off stump.

Yet more than an hour later, Australia had still to separate Overton and Somerset teammate Jack Leach, promoted to No 10 after his last-man heroics helped England to a remarkable one-wicket win in the third Test at Headingley.

But part-time leg-spinner Marnus Labuschagne succeeded where Australia's frontline bowlers had failed by ending Leach's 51-ball innings when he turned one out of the rough to have him caught at short leg by Matthew Wade for 12, with England now 196-9.

This match was a triumph for Australia's Steve Smith, the world's leading Test batsman, who scored 211 and 82.

That took his tally for the series to 671 runs at 134.2 including three hundreds, despite Smith missing the third Test with concussion.

England, resuming on their overnight 18-2, got through the first hour of the last day without losing a wicket.

But when Ben Stokes, whose superb 135 not out had sealed a stunning win at Headingley, fell for just one shortly before lunch, England were floundering at 74-4.

They had started the day with makeshift opener Joe Denly 10 not out and Jason Roy eight not out after Cummins had taken two wickets in two balls on Saturday, including Joe Root for a golden duck, the England captain's third nought in five innings.

The most England had made in the fourth innings to win a Test was the 362-9 they posted at Headingley.

But their immediate goal was to bat out the fifth day for a draw -- something they had not done since defying New Zealand at Auckland in 2013.

World Cup-winner Roy, who has struggled to transfer his one-day form into the Test arena, defended solidly until fast bowler Cummins's fine-off cutter found a gap between bat and pad to bowl him for 31.

Stokes, who walked out to a huge ovation, had made just one when Cummins cut one back to the left-handed batsman, with Paine holding a good diving catch off the inside edge.

Stokes did not even wait for umpire Marais Erasmus to raise his finger before leaving the crease.

Denly, 48 not out at lunch, completed a 112-ball fifty when he drove Mitchell Starc down the ground for four.

But he was out for 53 when he gloved a Lyon ball that turned and bounced to Labuschagne at short leg.

The normally attack-minded Jonny Bairstow took 61 balls to make a 25 that ended when he was lbw to Starc.

Steven Smith The Ashes 2019 Cricket England vs Australia, 4th Test
Get the latest updates on ICC Women's Cricket World Cup 2022 and IPL 2022, check out the Schedule , Live Score and IPL Points Table. Like us on Facebook or follow us on Twitter for more sports updates. You can also download the NDTV Cricket app for Android or iOS.