Rohit Sharma left the field shaking his head after being adjudged caught behind off Kemar Roach. 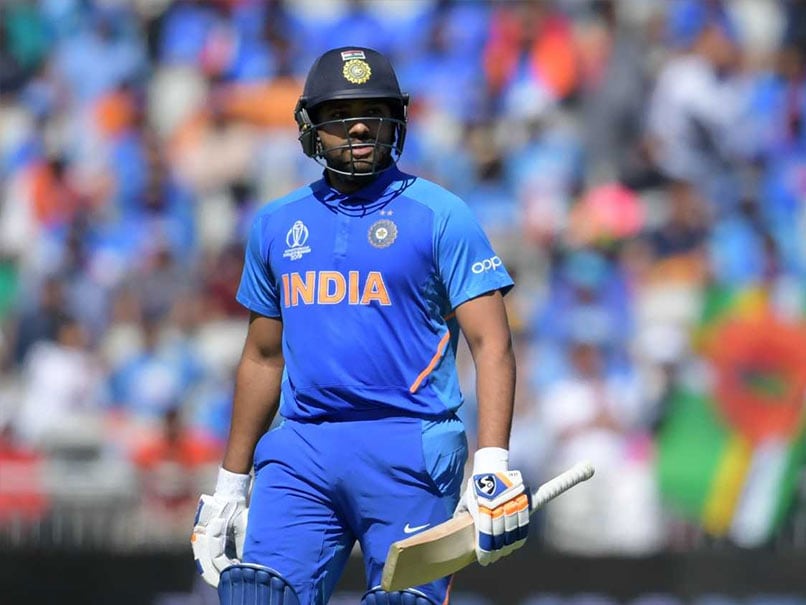 Rohit Sharma's dismissal off the bowling of West Indies fast bowler Kemar Roach during the World Cup 2019 league match on Thursday caused quite a stir on social media, with many questioning the accuracy of the Decision Review System (DRS). The Indian opener was adjudged not out by the on-field umpire but the decision was overturned by the TV umpire after West Indies skipper Jason Holder called for a review. After he was given out, Rohit Sharma was quite upset with the decision and left the field shaking his head.

The replay showed a spike when the ball passed both bat and pad at the same time, creating doubts over the real cause of it. People claimed that even after watching replays from every available angle there was no clear evidence, and since the on-field decision was not out, the TV umpire shouldn't have changed it.

It was not only the fans who had an issue with the decision but also England Test bowler James Anderson, who felt the decision could have gone either way even after watching replays from every possible angle.

"That was a tricky decision, even with the amount of replays you can have, to be 100 percent sure it's either one or the other," Anderson told the BBC.

For once I'm not convinced by that third umpire decision. Rohit Sharma wasn't either.

Questioning the decision, former Australia player Brad Hogg wrote on twitter, "Full sun on the ball, in the picture, on the right frame. Ball has hit the pad not the bat. Technology making the world a clearer picture, NOT! Rohit has to accept the umpires decision, ctrl+alt+delete!".

What's the use of the technology when umpires can't even use it properly.
Still don't know why wasn't hotspot referral done to conclude whether it came off pad or the bat! #CWC19 #INDvWI

India, who are unbeaten in their five matches so far and have displaced England at the top of the One-day International (ODI) rankings, were 47/1 at the end of the 10th over after electing to bat first at Old Trafford.

Old Trafford, Manchester World Cup 2019 Cricket West Indies vs India, Match 34
Get the latest updates on IPL 2021, check out the IPL 2021 Schedule and Indian Premier League Live Score . Like us on Facebook or follow us on Twitter for more sports updates. You can also download the NDTV Cricket app for Android or iOS.