Mohammed Shami dismissed Mohammad Nabi (52), Aftab Alam (0) and Mujeeb Ur Rahman (0) in consecutive deliveries of the final over. 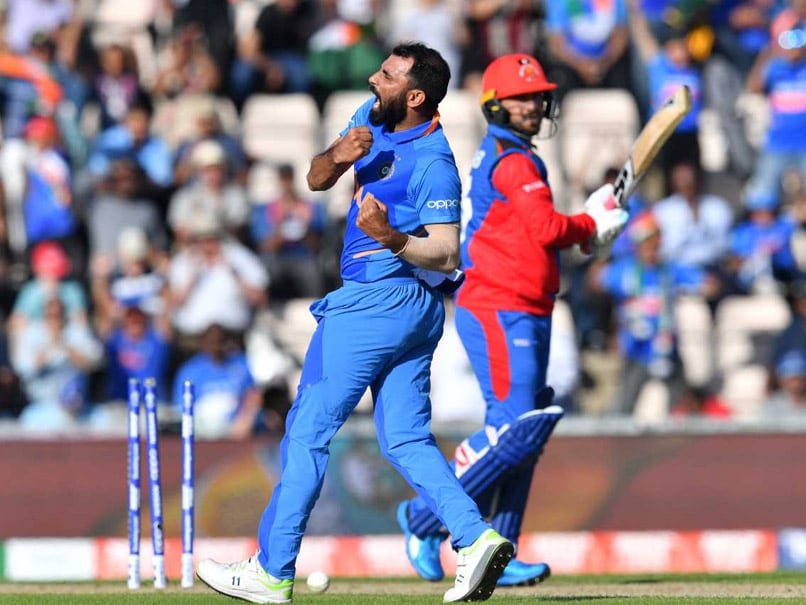 Mohammed Shami impressed in his first match of the ongoing World Cup 2019 as he claimed a final-over hat-trick to power India to a 11-run win over Afghanistan at The Rose Bowl in Southampton on Saturday. The 28-year-old pacer became the first bowler in the 2019 edition of the ICC showpiece event and only the second Indian after Chetan Sharma to claim a hat-trick in a World Cup match. Mohammed Shami missed India's first four matches and managed to make his place in the playing XI, replacing injured Bhuvneshwar Kumar.

Shami claimed four wickets in Hazratullah Zazai (10), Mohammad Nabi (52), Aftab Alam (0) and Mujeeb Ur Rahman (0) while conceding 40 runs, including a maiden over.

India looked tensed in the final overs of the match with Afghanistan fighting with all their grit and willpower.

In the final over, Afghanistan required 16 runs with Nabi on strike and brink of his half-century.

Shami struck after being hit for a boundary that helped Nabi complete his 13th One-day International half-century. He dismissed Nabi, Alam and Mujeeb in consecutive deliveries after a dot ball as India survived a scare with a ball to spare.

Afghanistan were bowled out for 213 in their chase of 225.

In 1987, former fast bowler Chetan Sharma had claimed a hat-trick against New Zealand to become the only Indian to have achieved this feat in the World Cup.

Shami joined the elite club that features 10 cricketers from across the globe.

"Everyone's waiting for an opportunity. Shami was really good today. He was making the ball move more than anybody," Virat Kohli said after the match, praising India's bench strength that saw Vijay Shanka and Shami impress on Saturday.

The Rose Bowl, Southampton World Cup 2019 Cricket India vs Afghanistan, Match 28
Get the latest updates on ICC Women's Cricket World Cup 2022 and IPL 2022, check out the Schedule , Live Score and IPL Points Table. Like us on Facebook or follow us on Twitter for more sports updates. You can also download the NDTV Cricket app for Android or iOS.